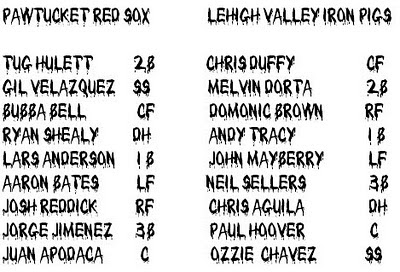 Fabio Castro started and got the loss, but hang on... Blake Maxwell? WHEN DID THIS HAPPEN? I feel so stupid... so many people are coming and going and half the time I'm flashing back to the Abe Alvarez era.

Also, at first I thought, isn't Blake Maxwell a position player on the Gwinnett Braves or something? Who is this Jonathan Broxton motherfucker I'm seeing?

Funny, I just looked him up and it seems Blake Maxwell was called up to Pawtucket late in 2007. Evidently, he did not get into a game. (source: Myself)

But enough about him. Let's talk about the Lehigh Valley Iron Pigs Offense feat. Domonic Brown, who is probably six foot nine in heels. Andy Tracy, who's pretty hulking himself, went 2-4 with a double, a grand slam home run, and four RBI.

WHOA, THUNDER! Andy Tracy is 36 years old? No, he is not! Damn, today is full of minor league surprises!

The Iron Pigs sent Drew Carpenter to the mound to start last night... they put a note in his lunchbox that said "You make us so proud". Carpenter (or 'Carp' as he likes to be called)pitched 6 2/3 innings and struck out Gil, Ryan (twice), Lars, Aaron (twice), Jorge, and Juan. Carpenter had a no-hitter going into the sixth, but Gil Velazquez spoiled dinner with his cheesy single, god damn spoiler.

Pawtucket did not score until the eighth inning, when Josh Reddick flew out to center, scoring Shealy from third. One more run, please? Yes. Bubba Bell hit an RBI single in the ninth. That's all you get and you are going to like it.

is it hot in here or am i just fat?
1. The gamecap (ugh, I already regret using that 'word') says it was 100 degrees in Allentown. Good thing those guys aren't doing steel work!
2. Domonic Brown hit a home run, did I mention? Besides, it is pretty clear to me that you are in love with him.
3. Thomas Belmont is not an aristocrat, he is a baseball guy. Please read his D. Brown assessment... it is like staring, panic-stricken, through your spacecraft window at the immensity of the Milky Way...
4. "Lehigh Valley IronPigs beat Pawtucket 8-2 in International League game" - Does that headline seem strange? It's like... "BASEBALL GAME PLAYED BETWEEN TWO MINOR LEAGUE TEAMS IN PENNSYLVANIA".
5. Andy Tracy is old and wise: "That's baseball," said Tracy, who had two hits to hike his average to .292. "Maybe we've been putting balls in play more often than fouling them off, I don't know. Like I said, that's just baseball." - Morning Call
6. Andy Tracy and Fabio Castro... bros? "Fabio can spin the ball real well, and he left one up a little bit and I got a hold of it," Tracy said." (ibid.)
7. This one time, Fabio Castro walked by me and I said, "Hi, Fabio." I couldn't help it. Whenever else in life will I get to greet someone named Fabio?
8. Phillies reliever Ryan Madson is rehabbing and pitched two-thirds of an inning last night. Madson blew a save in San Francisco and kicked a chair and broke a toe.

Tonight! Kris Johnson, Brandon Duckworth. You got that, Smart Suzie Sunset?
Posted by Jenks at 2:06 PM