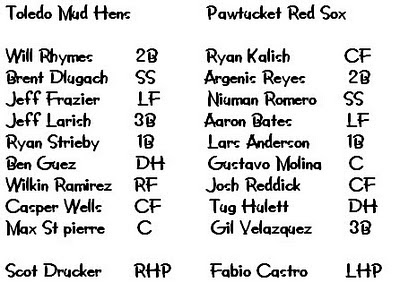 Lefty Fabio Castro started for the Red Sox and definitely did alright. Castro got c-slapped with the loss and that is how the ball bounces. Castro was replaced in the fourth inning with Randor Bierd, who's looking sharp in the pants dept. but much less so as a reliever.

Bierd needed to get two outs to finish up the fourth, but instead gave up a single, a double, a home run, and another double before he completed the out-getting task. What the hell was that all about?

Believe it or not, someone did something realistic and replaced Randor Bierd for the fifth inning. Unfortunately, it was Santo Luis, who evidently pitches with his wrestling mask on. I mean, the fifth inning went well, but the sixth inning was a flurry of hits and doubles and when the dust cleared, Toledo had four more runs.

Relievers Rich Hill and Chad Paronto might as well have been Lucy and Ethel up there... the game was long lost. Hill and Paronto's combined relief allowed the Mud hens to score thrice more. Hooray, Hens!

Center fielder Ryan Kalish managed to squeeze in a two-run homer to keep Pawtucket from getting blanked. Kalish is the biggest brightest light on the PawSox. He makes everyone else look like turkeys.

Toledo starter Scot Drucker pitched five scoreless innings and got the win. Lefty Ryan Ketchner tackled the bottom half of the game, which is I guess how they roll in Toledo. Just split the game in half!

what are you talking about? i love josh reddick!
1. Josh Reddick went 0-4 with two K's yesterday. And then after the game I read an article about how he is allegedly improving. We'll see about that.
2. Lars Anderson also went 0-4. Invisible infielder Argenis Reyes doubled. I was a little concerned that Reyes might burst into flames under the Super Attack Sun, but he did okay.
3. I love Fabio Castro. He is so cute and he does a really good job. I wish he was my friend in real life. Castro had five walks and five strikeouts.
4. This game lasted 3.5 hrs. I did not stay for the whole game, which was smart because I was getting a strange, painful sunburn out in left field. Left fielder Aaron Bates got a hit...
5. So Mud Hens catcher Max St Pierre went 4-5 with a home run? It was his first home run of the season. S'eclate!
6. Peter Gobis does it again... Check it out. I should be reading the Attleboro paper. That's some good old-fashioned baseball writing.
7. Some of the kidz are coming home: Daniel Nava, Dustin Richardson, Fernando Cabrera. Ryan Shealy?

Tonight! Felix Doubront will try and win one for people like me. By that, I mean unrecognized geniuses. New kid just up from Erie Charlie Furbush will fight back. Ooooh... I do like exciting performances by fresh meat. I don't know who to root for!