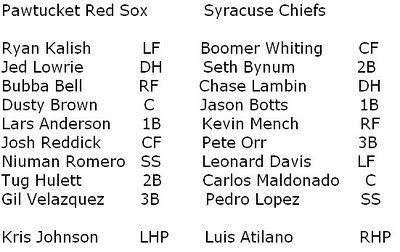 Red Sox starter Kris Johnson powered through like six innings and got six strikeouts. That's like almost a mile! Johnson gave up one run on six hits.

Chiefs starter Luis Atilano had a few problems, especially in the second inning. Lars Anderson led off the hit parade with a single... and singles lead to five runs like beer leads to heroin. Atilano walked Josh Reddick and Niuman Romero singled, loading the bases with no outs.

Tug Hulett managed to get Anderson in for the first Pawtucket run by hitting a long fly to center. The light-hitting Gil Velazquez (.160 with runners in scoring position) surprised everyone by hitting a two-run double! Yeah? YEAH!

So that was exciting and the fans were most likely calling all their friends to tell them what they'd just seen, but NOT SO FAST. Ryan Kalish, who batted leadoff, TRIPLED. YES. I love triples more than anything else. Has any team ever hit three triples in a row? I must try to look that up! Anyway, Velazquez scores and it's 4-0 Red Sox.

Jed Lowrie batted next and he smells like Vapo-Rub. Lowrie is still not back 100% and when he saw Kason Gabbard he wondered what damn day it was. Lowrie managed to lift up a wooden bat and fly out to left, scoring Kalish. Good job, Jed. Good job. 5-0 Pawtucket.

Things started to smart a little less for Syracuse when Leonard Davis drove in Jason Botts in the bottom of the second to bring the score to 5-1. But guess what? Syracuse didn't score its second run until the eighth inning, when n00b Santo Luis hit Kevin Mench with the bases loaded... Luis had given up a double and a pair of walks to juice 'em up with no outs. Nice debut, SL. Tommy Hottovy had to come in and get dirrrrty, striking out P. Orr and getting L. Davis to GIDP. Crisis averted.

Kason Gabbard polished off the remainder of the game like a plate of ribs. Syracuse was unable to score further and had to go home feeling useless and defeated and unable to enjoy marital relations.

The Saint:
1. The Chiefs went back in time and wore retro uniforms. You can see the glory here.
2. Pawtucket scored one run in the fifth, sixth, and seventh inning. Gil Velazquez hit an RBI triple in the seventh.
3. Dusty Brown is back. Brown went 0-5, but he was in the game catching. He could have DH'd, but he did not because he is badass in secret.
4. Doubles a go-go: Reddick, Romero, Velazquez, Bell, and Lowrie all doubled. Josh Reddick has more doubles than Bubba Bell, overall.
5. The Chiefs Leonard Davis went 3-4 with a double and an RBI.
6. Atilano has seen some time in the majors.

Well, that's it for now. Syracuse is celebrating the weekend by presenting 'Hillbilly Asshole Visiting Starter Night' on both Friday and Saturday! I love New York!
Posted by Jenks at 7:51 AM