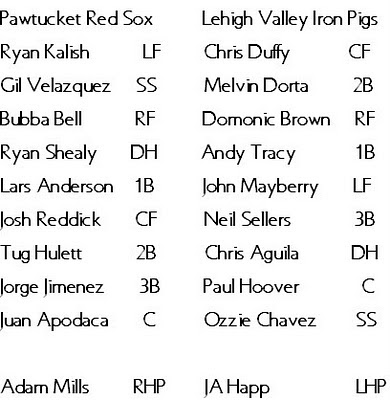 Adam Mills. Five runs, six innings. Mills entered the seventh inning but couldn't get an out.

the gin in my vermouth:
1. JA is re-Happ-ing. Sorry. That was terrible.
2. Thank you, Jeff Schuler, for a nice thorough game summary.
3. "One other noticable (sic) impressive point….in the Lehigh Valley dugout just prior to the game, Brown was going up and down the dugout high fiveing and showing energy that has very rarely be seen in the ‘Pigs dugout." - Phuture Phillies blog
4. Pawtucket probably lost due to their bus being stopped, boarded, and possibly searched by Iron Pigs secret agents earlier this season.
5. Reliever Mike Stutes is climbing through the system rapidly.
6. "Stutes, a right handed starting pitcher, helped lead Oregon State to the College World Series championship in both 2006 and 2007." Excellent. - PhoulBallz.com
7. Big Andy Tracy has made the triple-A all-star team. Some other people did, too, but I only like Andy Tracy.
8. Okay, fine. Cody Ransom was voted in as well, but he's been called up to Philly. Ransom really felt like he should have been called up sooner and was kind of a dick about it if you ask me.

Brown looks like a future superstar. Not that surprising to me that Happ is struggling, since his Major League success was always built on a house of cards.

How does Kalish look? He's been smoking the cover off the ball. I'm wondering if he forces his way into the outfield picture during September call-ups.

Kalish looks good and has adjusted well to the triple-A pitching level. I would not be 100 percent surprised at a September call-up, even though most people say 'No way'.

Bubba Bell has been a freak this summer. Long shot to be called up, though.