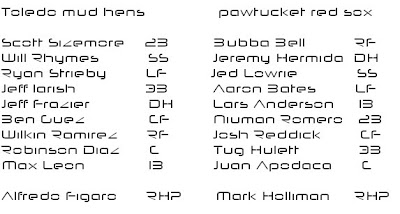 Toledo WINS! 4-1. And we get an exciting mystery pitcher instead of Adam Mills!

Mister Mark Holliman was called up from single A and I am not too cool to admit that I have never heard of him before. Holliman is 26 years old, so take from that what you want. Former Cubs guy and then plucked from an indy league. How nice for him.

I enjoyed watching Holliman pitch. MH worked six innings and got eight strikeouts... but those two runs blew his chance at winning. And that sucks, because it was a failure of offense! Where the hell did Bubba Bell go? No hits for Bell last night.

Red Sox reliever Randor Bierd was responsible for the other two runs. Bierd pitched a pair of innings with his socks up high. Robert Manuel pitched the ninth inning and... no, that's it, just that he pitched the ninth.

Mud Hens starter Alfredo Figaro sounds like a dish at the Old Canteen. Figaro pitched into the seventh inning, kept Pawtucket to a measly run, and struck out ten of them. He punched out Hermida and Bates twice. He got his win thanks to relievers Fu-Te Ni and Brendan Wise. How is that not a great romance?

two things:
1. In the fourth inning, Holliman bent in a crazy fucking curve to Frazier that was clocked at 62. It was almost an eephus pitch or something. I have never seen the likes of it. Marvelous.
2. Generally I avoid linking to the big boy newspapers around here, but I liked this game story and so might you.
3. And read this Attleboro story too! Peter Gobis is great.
4. Beloved IL staple Mike Rabelo was just released by the Tigers org.
5. So in the seventh inning, I think it was Ryan Strieby who a long ball to left that was foul. Clearly. A fan in the outfield was waving it foul and it was really funny, but the umps still conferred.
6. Aaron Bates is batting .111 in his last ten games. Jesus Christ. I don't get this guy.
7. Hens CF Ben Guez has the cutest freaking roster picture I have ever seen. Sorry, ladies, Benny is married! (Probably.)
8. Doubles! Here are some doubles: Anderson, Apodaca, Lowrie, Reddick, and Velazquez.

Of course, watch him have a dazzling performance tonight. I can never win.
Posted by Jenks at 10:18 AM