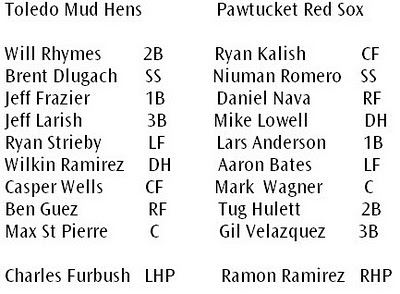 Pawtucket WINS! 5-4 in ten innings and they should throw a fucking parade for Lars Anderson or they would have been swept by the likes of Jeff Larish and Brendan Wise and Brent Dlugach.

Somewhere along the way Charlie Furbush became Charles Furbush, so I guess he's a big boy now. I suppose he did the best he could. K-Machine Furbush pitched six innings and gave up three earned runs (including a Daniel Nava home run) while striking out seven. Pawtucket's opposing pitcher was Ramon Ramirez, who is all better now. Ramirez went 4 1/3 before being replaced by Tommy Hottovy and also gave up three runs.

So the game was tied? Yes. Toledo led 3-0 until the third inning when Nava homered pretty much right after Kalish and Romero singled. Shocking, I know.

Toledo pulled ahead by a run in the sixth, when Casper Wells hit a solo homer to right center. Pawtucket tied it up again in the seventh, thanks to Tug Hulett bringing the noise. Hulett doubled with one out and was driven in by a Ryan Kalish sac fly. It's funny when Tug Hulett runs!

The game stayed tied until the tenth when the winning happened, but by then everyone probably had gone home. That is because they were giving away free jerseys and people show up early and line up a country mile for that shit. Why? I don't know. Mud Hens lefty Daniel Schlereth was pitching at the time and got spanked with the loss.

sympatric:
1. I know that winning is not the point in Pawtucket. I know fielding a good team is not the point. I know that no one is happy that Nava's back down, least of all Daniel Nava, but for me this is an alternate reality where the triple-A team takes major precedence over Boston and up is down and down is up. I KNOW THAT.

2. Starting pitchers? Who needs 'em?! Not Pawtucket, that's for sure! Who knows, Fernando Cabrera might get the start tonight instead of whoever's on the bulletin board! I hope Mark Holliman sticks around, I really liked him.
3. Bubba Bell is not dead.... he's resting.
4. Charles Furbush is from South Portland, Maine, so yay and such.
5. Is Robert Manuel made of rubber bands? Manuel pitched three damn innings and got the win.
6. Some people say Rob Bradford's remarks about scouts in Pawtucket are bullshit. Who said that? Some people!
7. Hotel McCoy? Lou Merloni Highway? You can stop now.
8. Felix Doubront was supposed to pitch, right? So what happened?
9. Legacy of brutality: Aaron Bates went 0-4 and struck out three times. Jesus Christ, that guy could use some help. Is he like getting baked with Hyder before the game?

Tonight! Everybody loves Robert Coello. Jeanmar Gomez goes out there for Columbus. Eight games in Ohio? Yes, then the Durham Bulls come and I get excited.

1) Furbush is a silly, silly name. I would definitely change it if I was him.

2) Romero plays shortstop? For some reason I thought he was a third baseman.