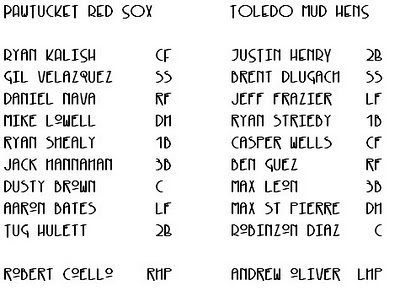 Winning pitcher? Toledo's Andrew Oliver, who provided a near-even distribution of five runs through five innings. Oliver gave up a couple of home runs and struck out six.

Robert Coello got the 'L' for Pawtucket. That damned fifth inning! Coello was cruising with a 5-3 lead into the fifth, but gave up a couple of singles to start the inning which certainly helped Jeff Frazier's three-run homer. Duh.

sleep, ryan strieby, do not cry:
1. Toledo left fielder Jeff Frazier hit two home runs and wonders if it's enough for a call-up. Casper Wells hit a solo home run in the second.
2. Gil Velazquez' hotness of late has earned him a ride up to the two-hole in the lineup. Velazquez responded by not getting a hit and striking out twice.
3. Ryan Kalish went 0-5 with two strikeouts. Hannahan was also hitless.
4. Mike Lowell went 3-4 with 3 RBI. If he's trying to impress the ladies, it's working. I certainly wouldn't mind bringing him a tray of fine nougats and cheeses.
5. Andrew Oliver = Andrew Miller? Enjoy Oliver's scouting report and other stuff here.
6. Reliever M. Bowden pitched the eighth inning for the Red Sox and gave up two runs on four hits. Whatever, it would have still been 6-5 anyway.
7. Casey Fien! Fien was claimed off Detroit waivers by the Red Sox in March, then claimed by Toronto a few days later when Boston put him on waivers. Toronto released Fien a week or so later and he was signed by the Tigers.
8. Reliever Daniel Schelereth used to have a blog. I can't tell if he's really hot or really weird looking. And his dad was a football player I've never heard of!
9. GAAAAH! NOT HOT! NOT HOT!

Tonight! Doubront v LJ Gagnier. Thank you, boys!
Posted by Jenks at 11:52 AM

I almost wish Lowell was flailing in AAA. Because he's doing well, I have to deal with constant insane talk radio chatter of dealing him straight-up for Scott Downs. How has he looked at third base? Has he been playing first at all?

He hasn't been playing first. I haven't seen him play in person, but I haven't heard that he's been sucking.

He cannot really run at this point, though.