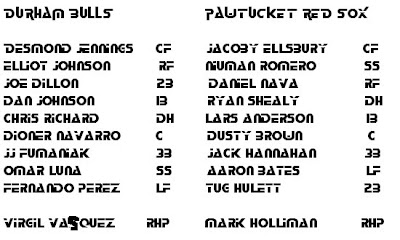 5-1 Bulls. And I'm deep enough into the season that I can say, "HA!" Seriously, how do baseball players do it? That's a lot of time to spend with your co-workers and not be arrested for multiple homicide. I'm pretty sick of most of these people and I don't even have to talk to them or be around them.

Pawtucket starter Mark Holliman only pitched two innings. Durham managed to crank out four runs during that time. Top of the second, first baseman Dan Johnson led off with a home run. His 30th. Jesus Christ.

Later in the inning, Omar Luna hit an RBI single and Elliot Johnson doubled two more runs across to bring the score to 4-1 Bulls.

After Holliman walked Dan Johnson at the top of the third, he was shooed back into the clubhouse so team MVP Fabio Castro could pitch. Castro wound up pitching four innings and Durham scored a fifth run in the sixth inning... there was a sac fly after a walk and it was so boring that I'll just say JOE DILLON DID IT.

Pawtucket's measly offense came in the first inning, when a bunch of cheap shit like fielding errors and HBP brought in a run. Trust me, the Red Sox had no serious threat against starter Virgil Vasquez. No extra base hits the entire game.

someone i can talk to, someone i don't have to talk to:
1. For some reason the game lasted three hours and twenty minutes. Is Vasquez a slow-ass motherfucker?
2. Oh, wow. Look. It's Jacoby Ellsbury. Wow.
3. Screw you, Ryan Shealy: Shealy went 0-4 with 2 K's versus his old team. Shealy must hate playing for the PawSox, what with all the losing.
4. Rich Hill pitched three scoreless innings, but as is so often the case, the game was already lost.
5. Virgil Vasquez' middle name is Matt. Matt. It's so incongruous.


I'm not finding anything useful out there about this game. I guess everyone wanted to go to the beach. Check out PawSox Keith's blog for more.
Posted by Jenks at 7:51 AM