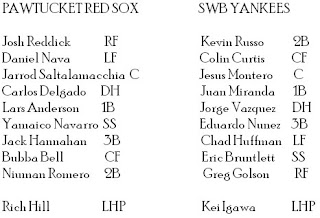 2-1 Yankees and let me tell you what happened, because it was awful.

Neither team scored until the ninth inning. SuperCloser Jonathan Albaladejo is close to tying the all-time saves record for the IL. BUT NOT LAST NIGHT! With one out in the ninth, Yamaico Navarro doubled off Albaladejo and then advanced to third on a wild pitch.

Hannahan then hit an RBI single, but he tried to make it to second and didn't make it. Which sucked because Bubba Bell subsequently hit a double.

Niuman Romero grounded out to end the inning and it was 1-0. All Robert Manuel had to do was get those last three outs, but instead he put Russo on base. Jesus Montero homered to center and that was it. DEFEAT.

Dude, that sucked. Pawtucket managed six hits off starter Kei Igawa, but couldn't quite get them across. Igawa struck 'em out, seven all told. Nava, Saltalamacchia, and Anderson all struck out twice versus Igawa. And also Delgado, because Carlos freaking Delgado is on the PawSox right now. I can't even believe it.

Rich Hill was really terrific for the Red sox, putting in a solid five with only two hits and a walk. Hill had six strikeouts and probably went home happy in spite of the loss. Or maybe he was pissed at the absent offense. Jocks are really complicated, you guys.

devastation at last:
1. Bubba Bell went 3-4 with two doubles. Lars Anderson went 0-4 with two strikeouts. Just like Goofus and Gallant, those two!
2. Josh Reddick went 0-4 and twice came up with runners in scoring position, but could not help his team out. I get no joy from sharing that. Okay, maybe a little joy.
3. I am gonna say this even though it's wrong in so many ways: Jesus Montero is exceptionally good-looking. Yes, I am possibly old enough to be his Ma. And he's a future Yankee. I AM NOT MADE OF STONE.
4. The Yankees pitching was aided by some hot, hot defense.
5. From Donnie Collins' live blog: "Carlos Delgado has hit the ball hard twice against Kei Igawa with nothing to show for it. Eduardo Nunez bobbled his sharp one-hopper at third, but still recovered and threw in plenty of time to get him at first. Delgado’s legs aren’t quite up to running the bags yet, I would say."
6. Kei Igawa never got up to a three-ball count last night.