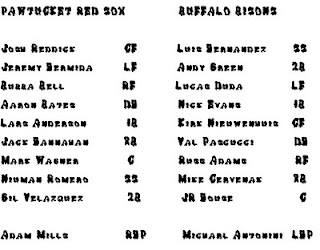 Pawtucket wins 7-3. Winning pitcher Adam Mills (3-9) tossed out six scoreless innings. His successor in relief, Dustin Richardson, had one scoreless inning to call his own.

Chad Paronto was called in for the eighth inning, but he had a few problems. Paronto gave up a single with one out, walked Andy Green, and then I don't know what he was throwing but Nick Evans and Nieuwenhuis hit consecutive doubles to score the first Bisons runs. Suddenly, Pawtucket's 4-0 lead was imperiled.

Enter the relentless handsomery of Fernando Cabrera. It wasn't a cute ending to the eighth - Cabrera threw a wild pitch and walked a couple of guys (This would have killed me if I were present) but in the end, he got Cervenak to pop out. Yikes.

Buffalo starter Michael Antonini had pitched the whole game up to that point, but was replaced by Yhency Brazoban in the ninth. Oh, Yhency. Brazoban got Bates to strike out, but Anderson knocked a single over to left and Hannahan hit a subsequent double to put two runners in scoring position with one out.

Mark Wagner, still shaking off the DL graveyard dirt, hit a single and scored Anderson. Niuman Romero, who'd been dropped in the batting order for Top Secret Reasons, did something cool and hit an RBI single to make the score 6-3.

HANG ON I'M NOT FINISHED YET! Gil Velazquez flew out, moving Wagner over to third, and then Reddick singled. It scored Wagner, but Romero failed to reach third and was thrown out by Nieuwenhuis. Inning over, but the Red Sox scored three more runs.

Cabrera led off the ninth inning by walking the lowest guy in the batting order, JR House, but a double play set him on track for the save. Last chance batter Andy Green struck out and Pawtucket won.

lookin' good when it comes to the punch:
1. Looks like Josh Reddick went 5-5 with another home run. His parents must be so proud. I'm glad I don't have to work with him.
2. Gil Velazquez went 0-4.
3. Mets fans want Lucas Duda in New York.

Tonight! It's Fernando Martinez bobblehead night in Buffalo. Remember that time I went to Buffalo? And Mike Lowell? I told you I wouldn't stop talking about it! It's also my canasta night.

Rich Hill and Raul Valdes are your pitching matchup. If you had to have sex with one of those guys, which one would you pick?
Posted by Jenks at 7:53 AM