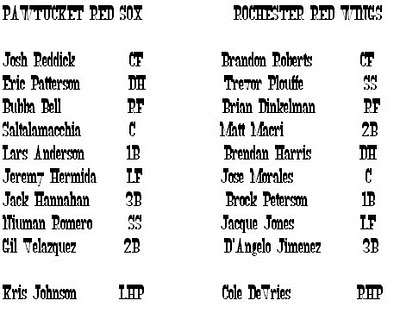 2-0 Red Sox. What has gotten into them lately?

Lotta zeroes in this game, including the biggest one, Brock Peterson. KIDDING. Kris Johnson pitched six innings and sprinkled four singles throughout. He might not have gotten the win, but Pawtucket got their first run in the seventh when Niuman Romero hit an RBI single off reliever Jose Lugo. Good old Romero. MVP! MVP!

Pawtucket scored its second run in the ninth inning, with Kyle Waldrop pitching. Saltalamacchia led it off with a single, Anderson doubled. Pat Neshek took over and Hermida hit a sac fly to left, scoring Saltalamacchia. 2-0 Red Sox.

Robert Manuel got the save, even after pinch hitter Dustin Martin doubled. Is that all Martin does is pinch hit? Did he do something wrong? He doesn't know who Jesus was or what praying is...

Rochester starter Cole DeVries did not get the loss, since he wisely exited the game in the middle of the sixth inning. right after Reddick doubled.

Can I go back to bed?
1. Reddick hit two doubles. They are going to give him the team MVP award. I have no idea why I care so much about this. But it's gonna be this cliched thing about his early struggles and what a fighter he is and what a professional young man he is and I swear, I am going to throw up..
2. Evidently, someone besides me likes Romero. Romero has fewer errors than Lars Anderson. Oooh, that was fun to say!
3. Jorge Jimenez leads the team in errors with 11. (!)
4. Jim Mandelaro from the Rochester paper: "But unless you are at least 90 years old, you have never seen a Rochester club 39 games under the .500 mark. Until now." I feel your pain, Red Wings fans.
5. "Lars Anderson then tried to score from third on Jack Hannahan’s fly to right but was nailed on a perfect throw from Dinkelman for the third out." - Mandelaro again, special to the Providence paper.
6. And from Twinkie Town: "Jim Mandelaro reported yesterday that the Wings are 0-72 when trailing after eight innings. Not a single comeback win in the ninth inning all season, that is almost unbelievable!"
7. Cole DeVries is yet another double-A callup. Did I see him on Mother's Day?