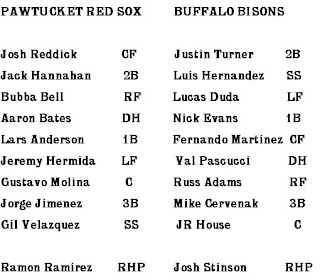 Pawtucket WINS! 9-2. Must have been White Boy Day at the park, as Lars Anderson went 2-3 with a double and a home run.

Pawtucket's starter was Ramon Ramirez, who very courteously pitched the whole game. Ramirez gave up two runs on seven hits and threw 93 pitches. Thanks for that, RR.

Stinson's reliever for the seventh was righty John Lujan. Lujan got Reddick to strikeout, but Hannahan singled to center right after that. Bubba Bell walked, Bates struck out, and then Anderson hit a two-run double.

But Pawtucket was not satisfied. At least, Hermida was not, because he homered to right. 9-0 Pawtucket!

Ramirez was pretty close to a shutout, but JR House hit a two-run homer in the bottom of the inning. Probably only Ramirez gave a crap, though. It is, after all, a collection of individual performances and not an honest ball game. THE PAWSOX ARE A LIE!

Some other stuff happened, but I'm so bored with all of this shit that I shan't address it. If I were a broadcaster... Well, I couldn't do it. "Bowden's pitch.. Oh, what a surprise! He walked him!"

"Bates steps in with runners in scoring position... He's gonna ground into a double play like he always does. Bet on it, folks."

"Coello's coming in from the bullpen and I can smell his cologne from up here..."

that is why i'm your king:
1. "Justin Turner was injured on a freak play, when a ball ricocheted off Nick Evans, and Turner’s knee buckled when he tried to change direction. Fernando Martinez suffered a slight injury to HIS right knee in the game, as well. Keep in mind the turf was very slick." - from Mets Merized Online
2. Bisons mgr Ken Oberkfell's post-game here.
3. Catcher Gustavo Molina also hit a two-run homer.
4. Josh Reddick did not get a hit in either game.