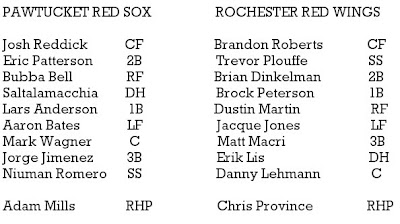 Rochester's starting pitcher was Chris Province, who maybe we've met before. Province immediately showed signs of suck in the first inning, when Patterson hit a ground rule double, Bell singled, and designated hitter Jarrod Saltalamacchia hit a home run to left... I would imagine he was batting left-handed so that must have been pretty cool.

Rochester struck back in the second inning when Red Sox starter Adam Mills allowed two consecutive singles by the Red Wings. Matt Macri saw his opportunity and humped all over it, hitting a double down the left field line (I think), scoring Dustin Martin. Erik Lis followed that up with an RBI double of his own, because he's a crybaby copycat liarhead. And the Adam Mills got his shit together and got the last three batters out to end the inning. 3-2 Pawtucket, not a comfy lead but we are dealing not with the 2010 PAWTUCKET RED SOX, but with IMPOSTER RUN-SCORING TEAM.

Eric Patterson can steal some fucking bases. Patterson led off the third by walking and stealing second. Isn't that the third one this rehab stint? So when Anderson singled, Patterson made it home. Aw, can we keep him? 4-2 Pawtucket.

Rochester, in scrappy endearing fashion, scored another run in the fourth with an RBI single courtesy of sex machine Brandon Roberts. But Pawtucket was not finished with Province. Fifth inning, Patterson led off with a triple to center. A triple! I WANT HIM.

Relievers Hottovy, Coello, and Cabrera conspired to provide endless hot steamy scoreless innings to hold the glorious score. Cabrera made it interesting in the ninth by giving up a double and a single, but in the end the love you take is equal to the love you make. Adam Mills got the win and I'm sure he called his Nonny afterward to tell her.

i love to cry and it shows:
1. Hey, Dusty Brown - When's the last time YOU hit a home run?
2. Nothing doing from my new favorite friend Niuman Romero, who went 0-4. Also being boring: Mark Wagner.
3. It's funny, when I think of Aaron Bates, which I do from time to time, especially in the cool of the evening when everything is gettin' kinda groovy, I don't picture him as a guy who walks a lot. But he does, it's right there on the internet. He leads the team in the K column, but he's also caught up to Tug Hulett for bases on balls. When I think about Bates walking, it erases some of my general ambivalence. Good work, Aaron Bates.
4. After the last couple of games at the Red Wings ballpark filled the stands, yesterday's draw was rather modest. 10K + versus 6,211. I wonder why? This is why I'm not Darryl Jasper.
5. It was the seventh straight loss for Rochester.

Tonight! Pawtucket returns home and will probably revert to their lifeless, empty baseball playing. How can I miss it?