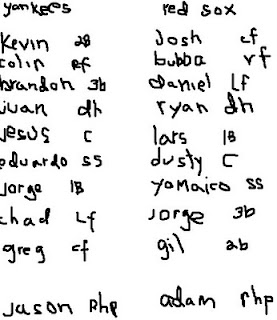 SWB takes another one, remains the IL North's first place team. Winning pitcher is Jason Hirsh, who pitched eight innings. The Yankees allowed Hirsh to throw 113 pitches, which likely hasn't happened in Pawtucket since the pre-Theo era. Can you imagine if Torey Lovullo left Felix Doubront in that long? Ben Cherington would have a stroke.

Not that Pawtucket has many starters left. Adam Mills is one of 'em. Mills had a bad night last night, which you can read about here. They scored seven runs in the first inning! You can't recover from that!

Only shortstop Eduardo Nunez was hitless for Scranton last night. For Pawtucket, Jimenez and Navarro each went 2-3 with a home run. Yes, Yamaico Navarro hit his first home run in triple-A.

migajas:
1. Dusty Brown went 0-4 and struck out three times. Some people are saying he'll get tossed once Wagner's 100 percent. Who's saying that? Some people!
2. If someone had told me that two PawSox players hit home runs last night, I think it would have taken me hours to guess that it was Jorge Jimenez and Yamaico Navarro. Lars Anderson and Daniel Nava? NO. Bates and Reddick? NO. Ryan Shealy and Saltalamacchia? NO!!!
3. Reliever Santo Luis had maybe his first decent outing, going 2 1/3 with no hits and two K's.
4. The Red Sox committed four errors. Navarro made two of them. He's developing!
5. Juan Miranda was hit by a Tommy Hottovy pitch. Atta boy, Tommy!
6. Hirsh on striking out Navarro: "In my mind it was kind of like revenge, like, ‘Hey, I got you back.’"
7. Whoa. This is crazy. Torey Lovullo says, "We don’t want to win at all costs. The Yankees do. I remember seeing Robinson Cano back in 2002. He was hitting around .320 for (Class A) Greensboro and they moved him back down to their Staten Island team so they could win the pennant. That’s how the Yankees operate." - Terry Nau for the Pawtucket paper. Send us JD Drew!

No mas! "If you don't mind, I'd rather not relive it. Don't really feel much like talking about it."

Kei Igawa tonight in Moosic. Kyle Weiland will get his first start for Pawtucket! Hooray!!!

Or maybe it's Rich Hill. Yeah, wow. Maybe tomorrow, Gustavo Molina can pitch!
Posted by Jenks at 8:03 AM