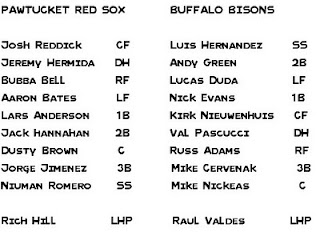 Your glamorous and sexy PawSox starting pitcher was Rich Hill, and I'm pretty comfortable with him as a starter. Hill pitched five innings (of course) and Buffalo only scored once on five hits. Hill issued a couple of walks and struck out four.

Pawtucket struck first in this game, when Hannahan hit a two-run single in the second inning. The team bumped it up to 3-0 in the third inning, when a couple of singles and a walk loaded the bases for Lars Anderson, who hit a sac fly to center, scoring Reddick.

Mike Cervenak led off the fifth inning with a single off Hill, then stole second base. Cervenak slipped over to third when Hernandez grounded out. And then when Andy Green doubled, it was crazy, Cervenak ran home to score the first Buffalo run.

Sixth inning, Hideki Okajima in. In a weird way that I cannot explain, I'm not really a huge Boston Red Sox fan. But I do really like Okajima! And immediately Nick Evans hits a triple to center field and I wish I could say Reddick wasn't too sharp on the play and that's how Evans got over to third, but I don't know, I wasn't there. And then Nieuwenhuis grounded out in such a fashion that Evans scored to make the score an uncomfortable 3-2.

And now let's talk about Val Pascucci. Robert Manuel was pitching the eighth and Pascucci hit a solo home run. It's the least he could have done. Pascucci is a living representation of an oaf, but maybe he's really smart? Anyway, tie game!

In the tenth inning, Josh Reddick hit a grand slam, but who cares because Jorge Jimenez hit an RBI single earlier in the inning which would have won the game right there. Manuel pitched the bottom of the inning and the Bisons didn't score, so think about that!

Bisons starter Raul Valdes wore the loss like a crown of thorns... Seven innings right down the toilet. Poor kid.


'Retarded artistically. Idiotic in other respects.'
1. The Bisons catcher for the game was Mike Nickeas. WHO? What happened to House? Was it Lupus?
2. Aaron Bates did not get a hit but he did walk three times, which is a great contribution. Jack Hannahan had two RBI of his own. And he played second, which is weird.
3. Tommy Hottovy also pitched one inning. I'm pretty sure we've been through this before. It seemed like a simple place to score.
4. Bisons' mgr Ken Oberkfell on Reddick: "This guy was Babe Ruth in this series." Oberkfell was ejected from the game for arguing the following call...
5. More from Mike Harrington: "The Bisons got a bad break in the bottom of the first as they loaded the bases with one out and didn't score. Pawtucket got out of the inning as Nieuwenhuis grounded into a 3-6-3 double play to end the inning. At least that was the call of fill-in umpire Wally Bissett, a Buffalo resident who ruled Nieuwenhuis out. Replays showed otherwise." You should probably just read that whole article, it's really good...
6. From reader 'Rob Castellano' on the Amazin' Avenue blog: "staying in buffalo, kirk nieuwenhuis has been pretty terrible at the plate lately. he’s looking a bit gassed though he’s played more than this many games the past two seasons; this is the guy who owns the single season record for games played in brooklyn we’re talking about."
7. EVEN MORE on Wally Bissett, from mgr Torey Lovullo: "You should call Randy [Mobley, IL prez) and if you do, you have my support. We had episodes when we went into Columbus where we were embarrassed by the umpiring behind home plate that cost us in a couple of key situations. I'm not really commenting on what went on out here but I think there's a place and time for an umpire to be out at a base but they really shouldn't be at first or behind the plate."