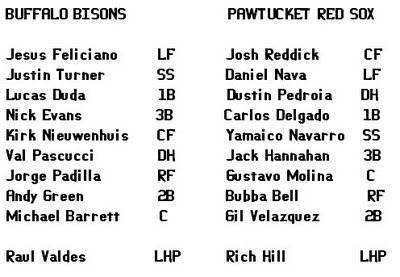 PawSox win 3-1. The one run belongs to Rich Hill, who pitched five innings and got the win. Good work, Rich Hill.

Buffalo starter (who's also a reliever) Raul Valdes wore the L all Laverne-like. Valdes' start was cut off with two outs in the fifth. They brought in a righty, Jose De La Torre, to face Velazquez. Yeah, you can't take any chances with Velazquez. He's such a tough out. And a power threat!

Laugh all you want, but Gil Velazquez hit a two-run homer off De La Torre. And it was his first of the year. HA!

Chad Paronto, Santo Luis, and F. Cabrera stapled down the win for the Red Sox. Hmm. I guess that's it...

freedom:
1. Rich Hill continues to hit people with baseballs: Nick Evans and Val Pascucci both took one in the ribs, figuratively speaking. Could have been a shoulder or thigh.
2. Gil Velazquez and Gustavo Molina were the only Pawtucket kidz to get hits. Molina hit a double in the fifth, scoring Hannahan. How did Hannahan get on base? The world may never know.
3. Val Pascucci hit a solo home run in the fourth. Good to see Pascucci back in the IL. He is interesting to look at... Kind of like a Bugs Bunny gorilla-style baseballer. I love his Japanese theme song.
4. The 'Warning Track Power' blog has a more poetic game summary.
5. Raul Valdez defected from Cuba.

Tonight! Fernando Nieve, Fabio Castro. I'm having second thoughts about the Fabio Castro MVP thing, because Robert Manuel's been so excellent for Pawtucket.

Alright, let's have breakfast!
Posted by Jenks at 7:51 AM

Val Pascucci! Great name, great AAA hitter. I had always hoped he would have gotten more of a Major League shot, but it doesn't seem like it's going to happen, much like with Morgan Burkhardt and Creighton Grubanich and Roberto Pantigue.