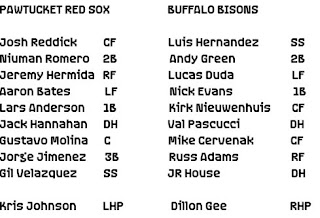 Kris Johnson loses, 12-4. Bisons starter Dillon Gee was not wowing anyone, but he got the win so get in the kitchen and make him a sandwich!

Pawtucket scored first when Josh Reddick hit a solo home run in Pawtucket's first at-bat of the game. In the bottom of the inning, left fielder Lucas Duda hit a double with two outs. A wild pitch got him over to third, and then when Nick Evans hit a grounder, Jorge Jimenez made an error throwing over to first and Duda scored.

The Bisons scored a second run in the first when Nieuwenhuis hit an RBI double, scoring Green. The score would jump up to 4-1 in the fourth inning, when Pascucci scored on a passed ball and catcher JR House sac flied Cervenak home.

Kris Johnson started the fifth inning, but after giving up a walk and a double and not getting an out, he was replaced by TJ Large. I had to pause for a second after typing that sentence. Large got out of the fifth untouched, but the sixth inning made a jerk out of him. Russ Adams hit a two-run homer, Nick Evans hit an RBI double, Velazquez made an error that cost another run, and there it was: 8-2 Buffalo.

In the top of the seventh inning, Gustavo Molina hit a solo home run off Gee to make it 8-3. Sean Green replaced Gee with one out and two runners on and wound up allowing Romero to single to load the bases. And then Green walked Hermida to bring in a fourth run for the Red Sox.

In the bottom of the seventh, Hideki Okajima pitched for Pawtucket and gave up four runs. Okajima only got one out. They replaced him with Santo Luis and surprisingly, Luis got the job done. Pitched the rest of the game with no further runs scoring. Remarkable! And yet, in the end, nobody won. Except Mike Cervenak who went 3-5.

i'm sorry, you were saying?
1. Russ Adams is so hot this month!
2. Joy of Sox has a cool game summary.
3. Dillon Gee has set the single-season strikeout record for Buffalo this year.
4. Josh Reddick went 3-4 with two home runs. If he's crowned team MVP then I will projectile vomit.
5. Both Aaron Bates and Lars Anderson went 0-4 with 2 strikeouts. Gil Velazquez went 0-4 with three K's, but he gets a pass from me because he's not an annoying mallrat type.
6. Everyone on the Bisons got a hit last night.

Tonight! Adam Mills, Michael Antonini. Should be a cold night in Buffalo.
Posted by Jenks at 7:03 AM