8.14.10 You should have invited Alejandro Machado, too. 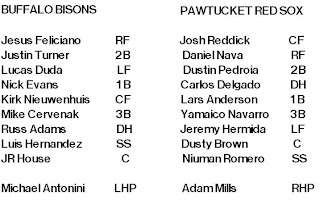 6-4 Red Sox. Robert Manuel gets the win for Pawtucket, pitching three innings (!) in relief. Manuel threw 32 pitches, 23 for strikes. He only gave up one hit. Robert Manuel is only of the only good things about the team. For me. You might be a Daniel Nava fan or something.

Pawtucket starter Adam Mills managed to pitch four innings, giving up four runs on seven hits. Second baseman Justin Turner hit a solo home run off Mills (I really need a more catchy term for a home run that doesn't make me sound like a Stuart Scott wannabe) in the first inning. Mills came back out for the fifth inning but instead of getting any outs, he gave up an RBI double, which tied the game at 4-4.

With runners on first and second, Dustin Pedroia lined a single to pitcher Michael Antonini, who reportedly responded with, "OHHH!" Bases loaded, Carlos Delgado, but don't get too excited, because CD was hit by a pitch, scoring Reddick. Tie game!

Anderson singled and Navarro hit a sac fly to bring the score to 4-2. Then the Adam Mills stuff happened, allowing the Bisons to tie the game, but Pawtucket pulled ahead with a solo home run (Navarro) and an RBI double (Romero). Romero tried to make it a triple, but... no. Bold move, though. I ain't mad.

Relievers on both teams conspired to prevent any further runs from scoring. Fernando Cabrera got the save for the PawSox. Antonini took the loss for Buffalo, giving up all six runs on nine hits in SIX INNINGS.

they called dave berg 'Ice'
1. Dusty Brown did not get a hit last night. He is in a heinous slump, probably an injury thing. Brown is batting .179 in August. He's struck out 11 times in 7 games but hasn't walked once this month. 9-39 in his last ten games. I'm wondering... Should we kill him?
2. Lars Anderson went 2-4. He also made the game ending play, when Turner lined out to him... Jesus Feliciano was off the bases and Anderson did the double-up. Tasty.
3. Prior to Navarro's home run, the Bisons pitchers had not allowed one in 126.2 innings.
4. Justin Turner went 3-4.

Today! Rich Hill, and I approve of making him a starter, since that was his long-time gig in a past life. He'll oppose lefty Raul Valdez, freshly down from New york, so you know he'll be in a good mood!