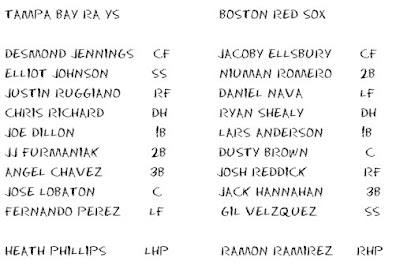 Robert Coello didn't start, and does anyone really need to know why? HE JUST DIDN'T. Instead we get Ramon Ramirez, who pitched 5 2/3 innings and gave up two solo home runs to Ruggiano and Richard.

Chad Paronto must have been puffed up with pride over 1 1/3 scoreless innings. It was Fernando Cabrera who was a very naughty boy. Cabrera didn't get any outs. Eighth inning: Walk, single, walk, single single single... grand slam. That's possibly one of the worst relief outings I have ever seen. Or would have seen, I generally don't go to the park on weekends. Crazy. Poor kid.

Is anything else relevant after that? Seven runs without an out... sorry, Pawtucket can't recover from that. They are not Columbus or SW-B.

this is mine, you can't take it:
1. Red Sox runs: Nava's RBI double in the third and Lars Anderson's two-run single in the fifth.
2. Niuman Romero went 0-5 with a strikeout, Velazquez 0-5 with 2 K's. Velazquez is now 0-17. I am not a jinx.
3. Tommy Hottovy very nicely pitched the last two innings. Hottovy did well: One walk and no hits.
4. Another catcher in Pawtucket? So, there are four, now? Dusty Brown must be so pissed.
5. "Desmond Jennings hit a grand slam (#4-7 in inning, and Jennings' first ever grand slam). Fernando Cabrera exited to boos from stands." - from 'Watching Durham Bulls Baseball'
6. Pawtucket's greatest third baseman of all time, Angel Chavez, came back to McCoy. He was probably looking for me, I don't know.
7. Angel Chavez hit a home run on May 28th: "Chavez's blast, which hit Ye Olde Snorting Bull beyond The Big Bad Beautiful Bogus Blue Monster and won him a salad (it hit the grass portion of the mural; sorry Angel), came on the very first pitch thrown by Red Wings' reliever Rob Delaney. It looked like a lame fastball, but after the game Chavez said it was actually a slider. (It obviously didn't slide very much.) He was looking for a breaking ball on Delaney's first pitch, he said. Why a breaking ball, he was asked? "I don't know. Runners on second and third." And then he said either "one out" or "why not." It was loud in the clubhouse, and you couldn't tell which." - from Adam Sobsey for Indy Week.
8. Heath Phillips nerd-fest here. Again, I am clearly a dumb-dumb who cheated through physics, but what is fun about this? It's barely even relevant to baseball.

I imagine Molina and the other guy on the DL get cut or sent down to AA or even A when they get healthy. It wouldn't surprise me if one of Brown or Wagner get moved to AA either, since there is no way the Pawsox can find regular at-bats for all three.

I like the move for Salty though. I'd rather bet on his chances to rebound and become a viable starter as opposed to Brown or Wagner developing enough.

How about Robert's start on Aug 2nd!