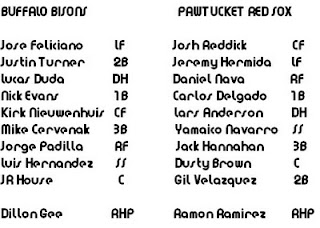 9-4 Mets. Dillon Gee was not at his best but still got the win because Pawtucket is pretty embarrassing right now. Ramon Ramirez again? Come on. Are you guys that paranoid about player development that you can't promote someone in mid-August?

The Red Sox have two starters right now: Kris Johnson and Adam Mills. Vomit. And don't try to front like Fabio Castro's a starter. Where are the 6-8 innings guys like David Pauley and Devern Hansack and Charlie Zink? Instead we get bullpen detritus to pitch maybe four innings, walk half the park, and get relieved by Chad Paronto or Fernando Cabrera or MICHAEL BOWDEN WHO HASN'T DONE ANYTHING WORTH ANYTHING!

Even double-A is more like a real baseball game. This is just pathetic. The bats aren't too thrilling either, but that's a whole other story. The visiting teams are more interesting.

It was really cool to see former Marlins Carlos Delgado and Jeremy Hermida reunited. I will say that Delgado's first at-bat was ugly to look at... Dillon Gee had him totally off-balance.

And then a bases-loaded situation in the seventh would have been a cool spot for Delgado to step up and crank one out and blow off the roof, but he'd been subbed by poor Niuman Romero, who struck out. And then Lars Anderson struck out. And then Yamaico Navarro struck out. Josh Reddick, Jeremy Hermida, and Daniel Nava just stood there on their respective bases, wondering what the hell they were doing in Pawtucket, Rhode Island. No RBIs, guys? Sorry to trouble you by loading the bases with no outs. Must have been that lethal Mike O'Connor/Shawn Green combo.

This game was three and a half hours long and I felt every minute of it. I'm so glad I brought company, otherwise I would have been long gone halfway through. Also, it started getting chilly, which makes perfect sense in mid-August. And you in your autumn sweater...

i just quit rock n roll:
1. Why does Roger Clemens look like Louie Anderson on the cover of the PawSox program?
2. Hey, they mixed up the lucky row of the game! Congratulations, Row EE! Someone must have read my insightful blog post.
3. I'm sure I've mentioned this before, but wtf is with Yankees fans who come to a PawSox game and root for the other team because they 'hate the Red Sox'? It's worse when they're loudly cheering and being generally assholish for the entire game. THIS IS NOT THE REAL RED SOX!!!
4. Josh Reddick went 3-5 and is maybe superstitious, since he is still wearing his prostate cancer wrist bands from a couple of weeks ago. DO NOT MESS WITH THE STREAK.
5. Jack Hannahan hits more balls that look like home runs than anyone. Except they're always caught right at the wall.
6. No, I do not know the players' at-bat songs for the most part. Josh Reddick has probably the worst one. It's a really terrible wrestling theme song. Jack Hannahan has an inexplicable River Dance type thing. Also the usual suspects: Next Episode, Kryptonite, Hypnotize, Krypnotize, and an occasional Latin American dance tune. Weak scene.

You know what else bugs me? The players who speak Spanish sit on one side of the dugout, the Anglos sit on the other. Gil Velazquez sometimes bridges the two sides. Pretty depressing to see that.

Josh Reddick, Jeremy Hermida, and Daniel Nava just stood there on their respective bases, wondering what the hell they were doing in Pawtucket, Rhode Island.

I laughed out loud at both of these parts. And, you must have been really psyched about Bowden's promotion.

I am psyched about Bowden's promotion and I hope we get some fresh double-A action.