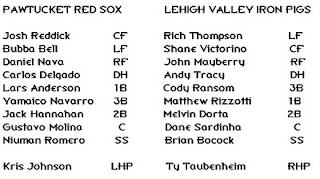 Iron Pigs win 5-1. Ty Taubenheim started but did not get the win, as Lehigh Valley didn't break away from the 1-1 tie until the sixth inning. Taubenheim's five innings were peppered with four hits and five walks, but Pawtucket only got one run across. Period.

First inning, Taubenheim loaded the bases with one out. Lars Anderson hit a fly ball to left, scoring Josh Reddick. Left fielder Rich Thompson threw the ball in to the catcher, Sardinha, who then threw over to short in the Daniel Nava area. Nava was out at second when shortstop Brian Bocock threw the ball over to Dorta... I guess you had to see it, but it sounds to me like Nava could have been a better baserunner.

Shane Victorino homered in the third with none of his buddies on base to tie the game 1-1. John Mayberry also hit a solo home run in the sixth to give the Iron Pigs the 2-1 lead.

Tommy Hottovy took over in the seventh inning. Hottovy intentionally walked Brian Bocock to load the bases with one out. He got Rich Thompson to fly out, but Shane Victorino hit a line drive single to right, scoring Dorta and Sardinha. John Mayberry followed with an RBI single of his own, bringing the score to 5-1 and extinguishing all hope for the Red Sox.

two things:
1. Iron Pigs reliever Michael Stutes got the win. Loss went to Johnson.
2. Yamaico Navarro went 0-4.
3. Okay: The win ended a six-game losing streak for Lehigh Valley. And their general manager, Kurt Landes, came up with a promotion called 'Camping for a Victory', which entailed a different staffer every night sleeping out on the field until they won. I can't even imagine this happening at McCoy.
4. And after the game, the players burned the tent. You can see it captured here. Good for them.
5. The Iron Pigs are interactive.
6. Mascots Ferrous and FeFe got makeovers recently.

Tonight! Ramon A. Ramirez v Vance Worley. Then home, playing Buffalo. See you then.
Posted by Jenks at 8:09 AM