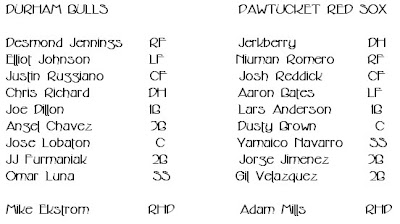 5-4 Pawtucket in a win that you would have thought was for the playoffs, what with the impromptu player celebration. Anyway, Aaron Bates came through and champed it up with a two-out RBI single, bringing Romero home and thrilling the kids. And maybe me a little.

The Durham Bulls started the game with reliever Mike Ekstrom, which is a common move in the minors when your rotation gets fucked up by the big team. Ekstrom pitched two innings (one run), then came Downs, Thayer, Bateman, and Swindle. Only Joe Bateman did not allow a Pawtucket run. RJ Swindle tried to emulate Bateman in the ninth, but he was no match for Aaron Bates' mighty single!

But let me back up all the way to the first inning. Adam Mills is back! Durham scored first, but Pawtucket tied it up 1-1 in the bottom of the inning with an RBI single from Brown.

The Bulls pulled ahead 3-1 in the third with a home run by Elliot Johnson, but when Dusty Brown led the fourth inning off with a double, everyone knew it was going down. Velazquez grounded out and brown scored. And then a rehabbing Ellsbury doubled, bringing home Jimenez who'd been hit by a pitch. Tie game!

Rich Hill got three K's in a row in the fourth, but then managed to allow a run in the fifth without giving up any hits. Yeah, one of those.

Oh, but don't despair because my favorite PawSox outfielder Josh Reddick hit a solo home run... or did he? Questionable. But he tied the game and it was 4-4. I think Reddick really wanted to be heroic in that ninth inning with runners at the corners, but instead he hit a cheesy infield pop-up. Aaron Bates is the guy you wanna blow, here.

Fernando Cabrera got the last six outs of the game and he looked great. How much hotter can he be? The answer is none. None more hot. He struck out Ruggiano and he struck out Joe Dillon and he struck out the catcher, Lobaton. I liked the part where he got three strikeouts. Also, I think he catnapped between innings. Too much sex, probably.

you can get what you want or you can just get old:
1. In the seventh inning, Niuman Romero managed to weasel his way over to third base without anyone ever getting a hit. Bates hit some dribbly infield thing and it looked like the pitcher, Joe Bateman, threw the ball over the first baseman's head allowing Bates to reach and Romero to score. Except there was a call of batter interference.
2. Jacoby Ellsbury was a little helper with his three hits. Ellsbury was later overheard asking, "Dusty Brown hasn't fucking left yet?" Also, Sox was overheard saying about Ellsbury: "I'd hit it."
3. Felix Doubront did a great impression of a reliever. Two scoreless innings and he looked great. Chad Paronto has this crazy bullpen initiation ritual that I can't really talk about, but Bowden had to go through it, too.
4. Jorge Jimenez is back. Jimenez scored a run, but never got a hit yesterday.
5. Gil Velazquez made a pretty dazzling play from second base in the third inning to get Omar Luna out. I wanted to make sure someone pointed it out, because everyone else is talking about the rehabber.

See you at Poster Night!
Posted by Jenks at 7:52 AM