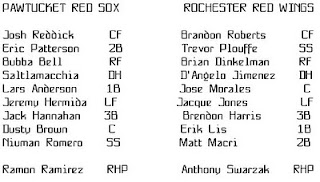 Final score 6-5 but only because some crazy Red Sox shit happened in the ninth.

It was yet another Ramon Ramirez start, but he got an IL Pitcher of the Week thing so fuck me, I guess. TOP THAT, KRIS JOHNSON! Ramirez pitched six innings and spread out three runs on five hits, one of them a Matt Macri solo home run in the fifth. Macri had a hottt night in Rochester, because he also hit an RBI triple off Santo Luis in the seventh.

Rochester countered with weirdo Anthony Swarzak. Pawtucket got 8 hits off Swarzak, but only managed one run in the second. Niuman Romero doubled and Reddick drove him in with a single. There were other base runners scattered like hash browns in the inning, but Brown and Saltalamacchia killed them all with groundouts. Damn, Dusty Brown. Get it together. I expect more from a Pawtucket veteran.

The score was 3-1 Rochester going into the seventh, but reliever Santo Luis gave up that Matt Macri triple and what's-his-name... hit a sac fly to score Macri and bring the lead to 5-1. Generally, that means curtains for Pawtucket! Just like last year, the team is not one to come from behind. Like your mom.

But then Red Wings reliever Anthony Slama met Eric Patterson in the ninth. Dusty Brown walked with one out in the inning and Good Old Niuman Romero hit a single. I love him so much. Guys like him get overlooked all the time and it's CRIMINAL. I would like to give him ten dollars, like for his birthday, like your grandmother might do.

Getting back to Rochester. Josh Reddick hit a three-run homer and I still think he's a jackass. The score was 5-4. Why does this stuff never happen when I'm at a game? Slama got the hook and Alex Burnett was next. How hard could it be? Just get two outs!

Burnett faced Eric Patterson first. I saw Patterson in Iowa at the ballpark in Des Moines! Have you ever been there? Probably not! I also saw Papa Jack when I was there. Papa Jack got a raw deal.

Sorry, I am all over the place today. Patterson singled, stole second, stole third, then ran home to score on a wild pitch. TIE GAME!!! And like, the whole time Bubba Bell was in the box, watching the goings on while he tried to have a productive at-bat. I wonder what goes through a batter's mind when stuff like this is going on?

Bubba Bell finally walked. And then stole second. Saltalamacchia doubled, Bell scored, and that's pretty much where the Red Sox won the game. 6-5. And here comes Fernando Cabrera, who's no Robert Manuel. IN BED.

Cabrera immediately gave up a single to Jacque Jones and then walked Lew Ford to put two runners on for Shannon Stewart. No, not really. It was Brendan Harris, who bunted to move Jones over but instead, Cabrera tossed the ball over to Romero and it was Harris who was safe at first. Dustin (Mohr) Martin came in to pinch run, but Cabrera finished everything off and game over, Red Wings.

i think that's really really sweet that your grandparents still make love:
1. Laugh all you want, but Jacque Jones went 3-4. He is also 35, if you'd like to take a moment and feel old.
2. Niuman Romero went 3-4. Bell and Brown were the only kids who didn't get any hits. 'Bell and Brown' sounds like the name of a pub.
3. WHOA. In his last ten games, Dusty Brown is 5-39, batting .128 with an OBP of .150. That is crazy! Must be still working through that injury. Either that or... Drinking problem.
4. Sellout crowd last night in Rochester. I wonder if the Conehead was there?
5. I want to go to the Twins' new ballpark sooooo bad. I wonder if Brad Radke goes sometimes?

Tonight! Rochester shoves a reluctant Cole Devries out onto the mound. Some jerk will oppose.