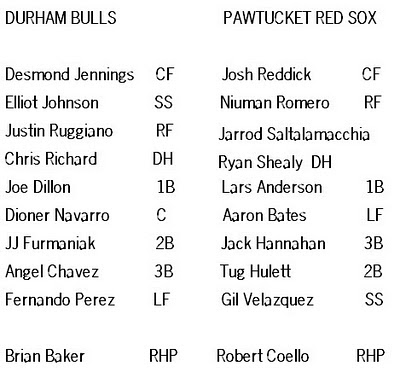 And I thought Jonathan Van Every was bad. I'll have to come up with some kind of nickname for Saltalamacchia... hmmm... let me think... Salta... Lamacchia...

Gosh, where do I start? I got totally stood up by Jeremy Hellickson so I was flattened, but Pawtucket managed to win 12-0 somehow so maybe that was good.

No, I still would rather have seen Hellickson. The PawSox suck.

I'm skipping over the pitching, but please note that 1) Coello was great and 2) watching Aneury Rodriguez pitch brought me closer to god.

First baseman Lars Anderson popped up to the catcher, Dioner Navarro, who I always secretly thought was so frickin cute. Then Bates and an RBI single, Hannahan doubled a couple more runs in, TUG HULETT! TUG GOD DAMN HULETT!!! Hulett got an RBI of his own and stood on first base like a king.

I'm not going through all the rest of it. The Red Sox batted around and Saltalamacchia got the last out.

You can probably read about this game everywhere else.

nazi punks, fuck off:
1. Screw Josh Reddick. Josh Reddick is boring. I know everyone loves him, but fuck that. I'm gonna throw Saint Gil a bone and say, hey, Velazquez went 3-3 with a double and is having a better season so far. Sure, Reddick will probably be the future starting center fielder for the Blue Jays or something, but fuck him. YEAH JUST TELL ME WHY VELAZQUEZ DOESN'T COUNT OR DOESN'T MATTER. BRING IT.
2. Aneury Rodriguez went ahead and finished the last five innings of the game. He wasn't lights out, but it is so cool watching him pitch. I feel very fortunate to have seen his work in person. He's very limb-y. Is that a word? You know what I mean.
3. I was pretty surprised to see Yamaico Navarro, who is Dioner Navarro's son. Navarro got into the game, jumping in for sarcastic infielder Gil Velazquez.
4. Robert Manuel banged out an inning and a third of scoreless relief. Manuel had previously been busy in the bullpen trying to arrange a date between a fan and... I think the entire bullpen. It looked pretty complicated.
5. Fernando Perez has a sick porn mustache. It made me feel funny. I wanted him to take his clothes off.
6. Jarrod Saltalamacchia is messing with Dusty Brown's cake. I'm angry on Brown's behalf. Maybe I'll pull a Squeaky Fromme in the McCoy parking lot.

Today! Me, I totally have to go to the game. Like, now.

No, I still would rather have seen Hellickson. The PawSox suck.

Does it all make you pine for the days of Wes Chamberlain, Greg Blosser, Phil Plantier and Michael Coleman?

All that and Bob Zupcic.

Jeff Bailey is awesome. What the heck is he up to now?

And I have fond memories of Bob Zupcic. It is depressing to look at his numbers on B-R and see that they're far less impressive than I remember as a kid. However, he did hit two grand slams in his rookie year, which is awesome.

Bailey is on the Diamondbacks triple-A team in Reno.