What the hell, Bubba Bell? 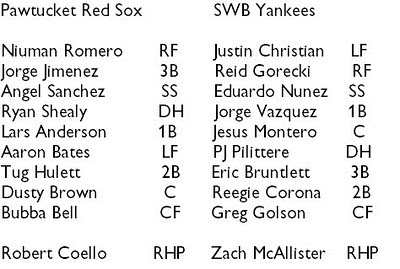 Bubba Bell's steady offensive output lately is confounding and I suppose proves yet again how little I know about anything. I totally thought he'd be released by this point!

Bell's also lucky that the Boston outfield's a triage unit. But good job, regardless. Bell is batting .419 over the last ten games, 1.245 OPS, etc.

3-1 Red Sox last night. While it's truly unimportant to anyone in the big league office who wins these things, I say HAHAHAHA FUCK YOU YANKEES!!!

Scandalous righty Ramon A Ramirez was supposed to start last night, but instead we got Coello. Coello struck out ten Scrankees, which I wish I could have seen. He was doin' alright in the sixth after he quickly got two outs, but Tommy Hottovy tapped in to finish it. Hottovy immediately gave up a double to Jorge vazquez, who'd solo homered earlier that night in the second inning, but he got exciting catcher Jesus Montero to ground out to end the inning.

Chad Paronto got four subsequent outs and gave up only one hit, good to see from a reliever who has had his ups and downs this season. Fernando Cabrera pitched the ninth and got his ninth save of the year, which I also wish I could have seen. Fly out, fly out, pop out, end. Cabrera then tore his jersey off in futbol solidarity. Probably.

Pawtucket's three runs came in individual succession in innings two, three, and four. Like a little fence of ones! In the second inning, Dusty Brown doubled to score Aaron Bates from second. In the third inning, Anderson sac flied to score Angel Sanchez, who'd doubled and advanced to third on a Ryan Shealy single.

Fourth inning: Bubba Bell cranked one out to right. Then he supersoaked that ho.

Zach McAllister got the loss for Scranton Wilkes-Barre. McAllister pitched seven innings and had five hits and two walks to show for it. And the three runs, of course.

could my eyelids cover what i did:
1. Mark Melancon pitched the last pair of innings for the Yankees.
2. SWB manager Dave Miley was super pissed off after the game.
3. Dusty Brown left the game with a thumb injury after the second inning. He tagged runner PJ Pilittere out at home... I think he got hurt during that play. I don't know, no one tells me anything. Go read the Providence paper, SQUARE.
4. Robert Coello has now slipped into something more comfortable: The Pawtucket starting rotation. And also, a satin kimono.
5. Can someone consider changing the name of the team to the Pennsylvania Yankees? I'm so tired of the whole "Scranton Wilkes-Barre" thing. It's a really unwieldy name for a baseball team and I hate typing it because I'm a lazy fatass.
6. I forgot to tell you that Tommy Hottovy's in Pawtucket now. And little baby Alex Hassan until we get some outfield help. Maybe we should keep Hassan? We could bring him to a tanning salon, just to get a base.
7. BALK! Robert Coello, second inning.
8. In case you care: The Yankees are dead last in the IL for home runs. Don't look so smug... Pawtucket's third to last.

Tonight! Ramon Ramirez will really for real start v Dustin Moseley. Til next time...
Posted by Jenks at 11:14 AM