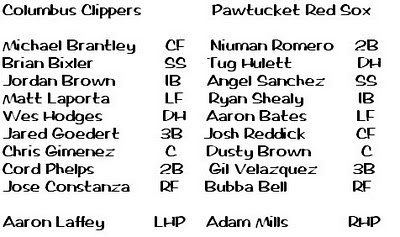 And Pawtucket starter Adam Mills didn't help with his eleven hits in 5 2/3, including two solo home runs. Why are all the PawSox starters so fucking boring? I wish I lived closer to Portland. Can't wait for Doubront to come back. WHY IS THERE NO ONE LIKE ARRIETA OR HELLICKSON HERE?!

It was 2-1 Columbus for a while and then in the sixth inning, Wes Hodges led off with a home run. Mills subsequently gave up consecutive singles to Goedert and Gimenez. Uh-oh! Cord Phelps sac bunts successfully, and here comes Jose Constanza.

And... RBI single for Constanza. But is Mills done yet? NO. First he had to get Brantley to line out. You'd think he could give a third out a shot, but Mills was up to 97 pitches so Chad Paronto jumped in the river. Brian Bixler then hit a two run single, bringing the score to 6-1.

Pawtucket down 6-1 in the sixth? Bad news. Not 2009-PawSox-Bad, but still pretty bad. Thank god for Jeremy Sowers and his wasted potential!

Sowers was bad, Pawtucket scored five runs, Fernando Cabrera got the save. Sorry, but this was taking forever today.
Posted by Jenks at 2:44 PM

Walsh said this was a good game!