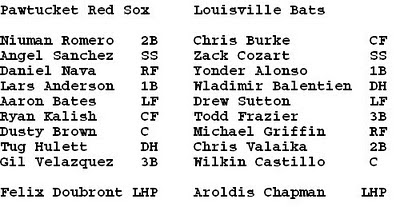 First things first: I was on vacation. OKAY? You're pretty lucky I'm even doing this today, since technically I have not yet returned to work.

This was a superlative pitching match up that I came pretty close to witnessing in person. AROLDIS CHAPMAN?! YES.

Pawtucket's starter was Felix Doubront (Brothers). FD went five innings with five hits and five K's. And two walks. And the one earned run, there.

Ramon Ramirez provided decent long relief, working hard in three innings and giving up another Louisville run. But not a Louisville urn, as I just typo-ed. Ramirez liked the urn a lot and kept it for himself. The run belonged to rocker Yonder Alonso, who went yard and delighted the fans, his parents, and his agent.

But I suppose you're all here to get the 411 on Chapman. Chapman was not terribly exciting in his Bats start. He gave up seven runs in two innings. Oh, sure, he threw hard... but his location had the sniffles and called in sick. It's a shame, too, because if you look at the rest of the box, his relief corps provided stellar numbers. Jesus Delgado pitched four scoreless innings and struck out five Pawtucket guys. Maybe Delgado should have started! And then Chapman could have blown it all...

Chapman faced six batters in the third inning without getting an out. He started the mess by issuing consecutive walks to Daniel Nava and Lars Anderson. Aaron Bates stepped up and delivered a harsh RBI double to right. NICE OPPOSITE FIELD POWER, BATES!!!

Ryan Kalish followed all of that with an RBI single to right. While I'm sure Kalish had a giant boner over facing Aroldis Chapman (and potentially getting a hit or something), it had to be deflated somewhat, considering Chapman was less than himself. I do not mean this in a taunting fashion. I just mean that reality is such a buzz kill.

Kalish then stole second base to get closer to L. Anderson, which proved to be moot when Dusty Brown walked to load the bases. Then Tug Hulett walked, because of course he did. Anderson scores and at long last, Chapman is removed.

So that was good. Bats relievers allowed no further runs, but the hitters couldn't climb back into it. Series split. Everyone goes home bored.

i want 90 people who just came out of the worst rainstorm in the city's history:
1. Uninteresting reliever Scott Atchison pitched the ninth inning. Atchison did not give up any runs, THANK GOD!
2. If you are going to call up Josh Reddick, then... seriously, when is Darnell McDonald returning?
3. "A couple of pitches early that were strikes weren't called strikes, and he didn't handle that real well." - Bats manager Rick Sweet. This simple statement makes Chapman come across as a primadonna. THE UMPIRES HATE YOU, AROLDIS CHAPMAN! PROBABLY BECAUSE THEY ARE JEALOUS.
4. "Bats trainer Tomas Vera, who doubles as Chapman's translator, said that Chapman declined to be interviewed." - more from Michael Grant's game story
5. Righty relief pitcher Jesus Delgado entered the game in the third with the bases loaded, no outs, and struck out Velazquez, Romero, and Sanchez in order. I certainly hope he was rewarded by the ineffective starter for not further blowing up his ERA.
6. Delgado was originally signed as a non-drafted free agent by none other than the Boston Red Sox back in 2001. He was 17! Delgado was stapled to Hanley Ramirez as part of the Beckett/Lowell trade. Delgado is one sexy, sexy man.

Tonight! Adam Mills v Charlie Morton in Indianapolis, which is the Pirates, which is interesting because I am going to Pittsburgh and I will probably mention this a thousand times before I actually go.

Is there a mercy rule?