We are here to help you, Jon Adkins. 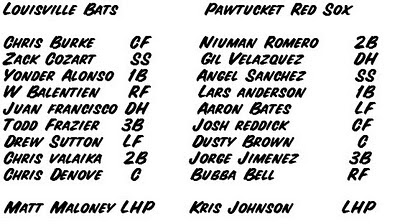 Lars Anderson, Aaron Bates, Gil Velazquez, and Niuman Romero all left runners in scoring position with two outs. Dusty Brown and Angel Sanchez each grounded into double plays. Both Anderson and Brown were hitless last night. This is the kind of thing Boston fans call up radio stations over. BUMS.

What about Kris Johnson, though? Johnson eked out 5 1/3 innings, but he gave up seven hits and half the Louisville runs. Chad Paronto also couldn't hang and gave up the other three runs, completing the six-run set. Paronto takes these things a lot harder than you would think. I am not even kidding.

Fabio Castro and Fernando Cabrera polished off the rest of the game without further incident. Castro struck out three Bats in 2 1/3 innings. What an unlikely strikeout guy. I say that because Fabio Castro is little.

Louisville starter Matt Maloney is luckyish. Maloney pitched 5 1/3 innings, but Pawtucket totted up eleven hits. And that is seriously a number that jumps out at you from a pitching line.

Screw it. This game is too complicated for me to plumb any further.

Two things:
1. Niuman Romero went 4-5 with two doubles. Romero then told the other guys on the team that he wasn't mad... just disappointed.
2. Bubba Bell tripled. Lars Anderson was 0-5 with a K. And two RBI for Sanchez.
3. Okay, I think I see the problem with Chad Paronto last night: 19 pitches, 8 strikes.
4. You might as well read Brendan McGair's thing for the Pawtucket paper. It's pretty thorough. Almost... too thorough.
5. This article about McCoy Stadium made me angry. But it is pretty helpful if you are a Martian.
6. I didn't even notice that Chris Burke needed a double to complete the cycle. I might have mentioned it if it were my job or something, but I am doing this out of charity and the kindness of my heart.

I can't tell you how much I love it when Boston isn't playing and all the sportswriters come out of the woodwork to write about Pawtucket, like they've been there all along. Dude, the Boston newspapers don't even bother throwing up a fucking box score for Pawtucket. A BOX! How hard would that be? Instead we get the one-millionth article about Mike Lowell being a gentleman and David Ortiz's struggles and Dustin Pedroia Is Gritty and the asshole hillbilly starting pitcher who dissed his Pawtucket teammates.

Tonight! Michael Bowden and His Plummeting Stock v Travis Wood. Please keep me in your thoughts, especially your thoughts about how hard I work here.