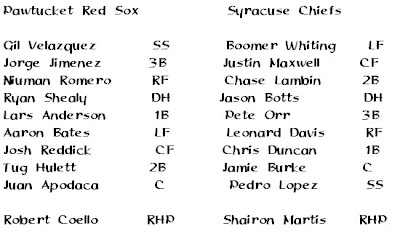 Pawtucket goes DOWN, 9-4. Ramon Ramirez did not start as planned. It was Robert Coello.

Coello didn't have his usual zing. He only pitched 3 2/3 innings and gave up six runs. Only three were earned, since Gil Velazquez made a fielding error in the fourth that put runners on the corners. Gil Velazquez... okay, never mind.

Wait, I wanna discuss the fourth inning. Pawtucket was down 3-0. Starter Shairon Martis was doing his thing. Jorge Jimenez led the inning off and reached first on an outfield error. And then right fielder (?) Niuman Romero hit an RBI double to make the score 3-1.

Ryan Shealy batted next and surprisingly, flew out. Lars Anderson followed that first out with a walk and Aaron Bates hit a three-run homer. So that was good. Yay Aaron Bates and such. 4-3 Red Sox.

But try not to get too excited, even though someone as fascinating and intellectual as Aaron Bates may do that to a person. Syracuse had no intention of being beaten by the sluggardly PawSox. With a runner on first, outfielder Boomer Whiting got on base when Velazquez mishandled a ground ball. Second baseman Chase Lambin then hit an RBI double to tie the game. Chase Lambin is a doubles machine, much like Brandon Moss was back in 2007. Lambin is third in the league with 23 doubles.

But enough about Cold Lambin. Mrs Jason Botts batted next and hit a two-run single. 6-4 Syracuse! End of the night for Coello! Paronto replaced RC and got the final out.

Paronto went on to pitch another two innings, giving up the seventh run. Robert Manuel uncharacteristically did not pitch a scoreless inning, instead opting to help the Chiefs score another pair of runs.

Kason Gabbard pitched the final inning without further incident. Pawtucket had no chance versus the likes of relievers Garate, Bergmann, and Wilkie and could not add to their run total. Syracuse takes 3 out of 4.

last night in syracuse put me in a haze:
1. I like Gil Velazquez and I'm not happy about witnessing his decline. Yes, I know he's coming off an injury, but even before he was injured, he had a few problems. That's how it goes in O.B., I guess.
2. Lars Anderson and Niuman Romero each doubled. I don't know how much time Romero has spent in the outfield, but since he started off his PawSox career as a second baseman-type, I can't help but think he looks weird out there. Except not quite as weird as Javier Lopez looked in 2009. Poor guy.
3. The Chiefs hit five doubles last night! Lambin, Whiting, Maxwell, Duncan, and Burke. Jason Botts hit a home run in the third inning off Coello.
4. "We all talk to each other. It is the best clubhouse I have ever been a part of in Triple-A." - Chase Lambin on being a Chief.
5. Chase Lambin also got a farewell party when he left his hometown for Nats camp. Please enjoy his Chiba Lotte Marines song and his accompanying awkward dance!
6. Chase Lambin is cute and I would probably set you guys up, but he has a girlfriend/wife.
7. PawSox starter Robert Coello hit Justin Maxwell and Jason Burke with pitches.

And this is completely unrelated to anything, but are you from Worcester? How in the hell do you explain this? And how have I never heard of it until today? Looks like it's time to attend a Worcester Tornadoes baseball game!

Tonight! PawSox return to McCoy! Tim Redding and Adam Mills again? How can a girl be so lucky!?

I'm from Worcester and no I can't explain that