Pawtucket is Swept Away by the Indianapolis Indians. 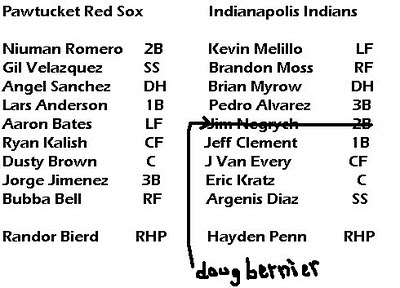 And I mean that in the most romantic sense possible. It must have been the unstoppable sexiness of Doug Bernier and Wil Ledezma and Brian Myrow. But not Kevin Melillo, Most Dangerous Man in the IL. 10-3 Indians in a rather woolly game. I listened to it on the radio, which was celestial because of Hoard and Hyder's sustained excellence.

I gotta first apologize for the effed up lineups. I'm certain that I got it wrong. I'm really glad I wasn't scoring this game. And not only that, I still really hate doing the lineups. But I do them first thing because it gets me into everything. I especially hate it when Van Every plays, because HIS NAME IS TOO GODDAMN LONG. It fucks everything up! He must run out of those little squares you have to pencil your name into when you take SAT's or fill out tax forms. JV, GO PLAY FOR A TEAM IN THE PCL! Nothing personal.

Randor Bierd started for the Red Sox. Is it me or does Bierd always look like he is smiling? He's like the Mona Lisa of McCoy!

I don't really feel like doing this. I'll sum up: Bierd was a disaster, everyone switched places when I rang the bell, Daniel Nava was called up (thereby removing anyone remotely interesting from the team), TJ Large might as well not even exist at this school, Chad Paronto had an at-bat (I would seriously have paid $$$ to see this), Brandon Moss is the Nicest Kid in Town, and I AM GOING TO SEE THE PITTSBURGH PIRATES FEATURING NEIL WALKER, VELVET JONES, AND BRENDAN DONNELLY!

I love you guys so much, but I have this thing I'm doing today that I can't miss. The PawSox are back in town, Saturday night they'll be dressed to kill.