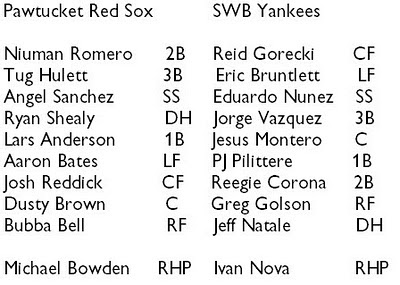 Yankees WIN! 4-3. Jonathan Albaladejo gets the win in relief. Fabio Castro FAILED to hold SWB and got the loss.

Michael Bowden threw 100 pitches! Write that down! Bowden made it to the seventh inning but Reegie Corona singled and stole second with one out. Then right fielder Greg Golson hit a line drive single to center! Golson made it to second on the throw.

The dangerous Jeff Natale approached the plate to face Bowden with runners in scoring position and only one out. I'll bet the fans were breathless, seeing former teammates face off like mortal enemies! Natale sac flied and scored Corona.

Bowden got the hook after that so Castro could face smug outfielder Ried Gorecki. Gorecki popped out to second to end the inning. 2-0 Yankees.

Pawtucket did something neat, though, in the top of the eighth. Ryan Shealy, who I freaking love already, led the inning off with a double off reliever Zach Segovia. YEAH RS!! Lars Anderson followed that up with a groundout, moving Shealy over to third. How unsatisfying for Anderson. You think he cares about a runner-advancing groundout? NO!

Segovia then faced Aaron Bates, who drew a walk to put runners at the corners. Good night, Segovia. Albaladejo enters. And then what do you think Josh Reddick did? WRONG, Reddick did NOT strike out! Reddick flew out to center, allowing Ryan Shealy to score.

Dusty Brown kept things going with a walk. Bubba Bell batted next and singled, scoring Aaron Bates. I really thought Bell would be gone by this time. I guess 2009 was an off year..

With the score tied at 2-2, Niuman Romero came to the plate. Romero popped out to third. Damn you, Niuman!

The Yankees pulled ahead by one run in the bottom of the inning, but Pawtucket tied it again in the top of the ninth! Ryan Shealy doubled AGAIN, scoring Angel Sanchez from second. What Sanchez was doing at second base, we may never know! Sanchez was not even in the lineup. In fact, Sanchez was wearing a ballgown. I know!

Castro, still in the game, came in for the ninth and threw a wild pitch with Justin Christian on third. Christian scored, 4-3, game over. I hate cheesy wins like that, don't you?

can't you see what this crazy life is doing to me?
1. Albaladejo has been an effective closer for SWB. Last night was his first blown save since last August.
2. Angel Sanchez went 0-5 with three strikeouts. Sanchez batted third. I think he should bat leadoff or second, but that's just me.
3. Bubba Bell and Niuman Romero both went 3-4.
4. Justin Christian, the kid who scored on the Castro wild pitch, had just been called up from double-A. He was coaching first base at the beginning of the game, but came in as a defensive replacement.
5. Dig on Donnie Collins' live blog of last night's match. I would do that sometime if I thought anyone gave a shit.
6. Fuck it, I'll do it anyway.
7. Last night's starter for Scranton Wilkes-Barre was Ivan Nova.
8. Michael Bowden had seven strikeouts, only walked one batter, and did not give up any long balls. Too bad Fabio Castro ruined what could have been a good night.

Isn't this game from the 21st or before? Reddick was in the Red Sox lineup on the 22nd, against the Rockies.