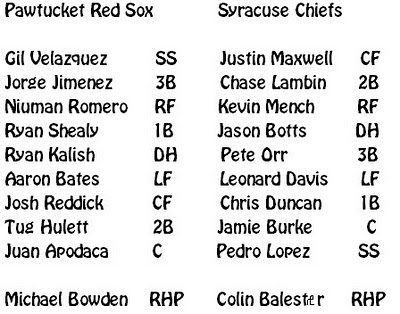 Before I begin, I just want to point out that even guys like David Pauley were capable of stringing together a few good starts at the minor league level.

Right-handed youngster Michael Bowden started for Pawtucket and everybody's talkin' at him, even though he don't hear a word they're sayin'. Bowden pitched six innings and gave up a run on four hits. And three walks. Bowden walks a lot of batters. Bowden walks more batters than Kris Johnson. Bowden has walked 2.693 batters per inning pitched. I did the math. Bowden has issued more walks than anyone on the PawSox and is 15th in the league for bases on balls.

Colin Balester did not start this game, even though I listed him thusly. I don't fucking feel like changing it. Bad enough I spelled 'Balester' wrong. Jason Jones started and was a disaster. Who cares about Jason Jones? Jones only worked two innings (he entered the third, but could not get an out) and was hung with the loss after the Red Sox nailed him with six runs. Ha, ha. Ha.

So, wanna talk about the offense? I sure do! (I'll save Fernando Cabrera for last.) Ryan Shealy continues to make me weep tears of gratitude for his bigness of bat. Shealy went 3-4 with a home run and a double and only need a triple for the cycle. Maybe he could have gotten one, if Colin Balester hadn't pegged him good in the fourth inning. I thought surfers were non-violent stoners? No? Does being a meathead jock cancel that out? COLIN?!

The PawSox evidently got lucky, because they didn't score any runs for the rest of the game. Syracuse is first in their division for a reason. It's about time they got exciting.

oh, geez, where do i start?
1. Gil Velazquez batted leadoff! Wow!
2. Pitching coach Rich Sauveur was ejected from this game. I presume it had something to do with Bowden's balk call. Balks are so controversial.
3. Welcome to Rhode Island, Juan Apodaca! Hope you like states with inferiority complexes!
4. Chiefs starter Jason Jones had just been promoted from double-A Harrisburg. Better luck next time, kid.
5. I just found out that David Pauley has been called up by Seattle. COINCIDENCE?