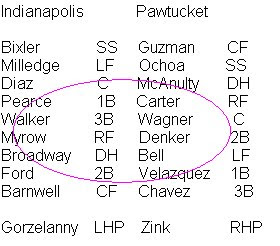 Indianapolis WINS! 7-3. What can you do but laugh at this point?

Charlie Zink, in 4 2/3 innings, walked seven batters. Four of those walks were batters being hit by pitches. I would feel bad for Zink, but I have stitches in my mouth and can eat only limited amounts of mushy things. He should feel bad for me!

Zink gave up four runs, by the way. And the bullpen's been slipping a little since right before the ASB. And now Clay Buchholz is gone. Things are gonna get real ugly, real fast at McCoy. Don't listen to what Chris Carter says.

Other tough kids out of the bullpen: Vaquedano pitched 2/3 of an inning and gave up a pair of walks! A pair of hits! A pair of runs! And a pair of pants! Billy Traber did well, so skip him and go to Rocky Cherry, who gave up three walks and three hits in 1 1/3 innings. Cherry gave up a run, but the game was pretty much over at that point anyway.

Javier Lopez pitched the rest of the game and did as well as could be expected.

Gorzelanny! Gorzelanny had six K's in six innings. Gorzelanny held Pawtucket to one run and no further runs were scored. Until...

... Until the bottom of the ninth. Steven Jackson is the new pitcher for Indianapolis. Travis Denker, who homered back in the fourth, leads off the inning with a single. Denker then casually moves over to second base while Bubba bell stands at home with a bat in his hand, trying to look tough. And Bubba Bell singles!

Then guess who comes in to pinch hit for Gil Velazquez? Aaron Bates! No suh! And all he does is hit a sac fly to center to get Denker home. Whoooo, I'll bet the Indians were shaking!

Third baseman Angel Chavez is next but he grounds out. At least he moved Bell over. And then the greatest thing happened: Carlos Freaking Maldonado, fresh off the DL, comes in to pinch hit for Freddy Guzman. NO. WAY. And of course Maldonado comes through and singles home Bubba Bell. And then Ivan Ochoa hit a single! TEAM VZ!!

And that was about it. The PawSox are just messing with you in these ninth innings. Come on. Did you really think they were going to come back from 7-1 in the ninth inning?

two things:
1. I wanted to go to bed really bad, but instead I took care of this business.
2. Lastings Milledge went 3-4 with 2 RBI. He is a star, of course.
3. Mark Wagner allowed two stolen bases BUT he also nailed a pair of base stealers.
4. Charlie Zink is currently in first place in the International League for walks allowed. He's walked 65 dudes. Durham's James Houser is in second place with 46. Holy crap.
5. Zink also leads the IL in hit batsmen with 20. He's number one with a bullet, since the guy in second has only 8. Holier crap.
6. Carlos Maldonado is exciting, but maybe only to me. And his mom, I guess. I'M RIGHT THERE WITH YOU, MRS. MALDONADO!!
7. Good game, Travis Denker. Now trim those sideburns!

Tomorrow! Enrique Gonzalez v Indians righty Brad Lincoln. I'm popping in because I need to rap with Ian Snell about some things.