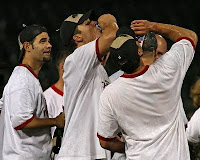 Javier Lopez arrived in Pawtucket right about May 15th. His May ERA was 9.53 through six appearances.

On June 9th, Lopez went on the DL. He was activated on the 20th. His June ERA was 1.69 through six appearances.

Lopez has made two relief appearances in July and has not allowed a run. In many ways, it appears he's putting it together.

Lopez is one of three lefties in Pawtucket's bullpen: See, there's Hunter Jones and Billy Traber, too. Unless someone's injured, though... yeah. It doesn't look good.

Pawtucket fans seem to like Javier Lopez and dislike Billy Traber. And I know why: Lopez is a more conventional nice guy who'll sign autographs (and will probably tell you he's never seen that card before, I guess that's his shtick) whereas Traber almost never talks to the fans, much less sign autographs. And Traber is almost sadistic about it: His glee is palpable and deliciously evil.

I kind of admire that about Billy Traber. But, damn, Poster Night's right around the corner and it's gonna kill him, I swear.

In summation, Javier "Lurch" Lopez is an old-school Pawtucket kid and I like him a lot. Until he screws up.

I wonder if he gets Atlanta's Javi Lopez' mail? "A summons?! What the?!"