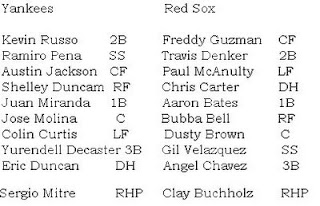 Clay Buchholz was terrific as usual. And Marcus McBeth is not human, I swear. IL superstar... all-star, even... Fernando Cabrera came in to close and was a little shaky. Then I got shaky. Two walks? WHAT. But it all worked out and we went home happy. Except children of divorce, they were a little less happy.

Buchholz (or "Blech-holz", as they call him in Mad magazine) pitched seven great innings, giving up three runs on five hit. I know what you're thinking: three runs against Pawtucket is ominous. But when you take Duncan and Miranda and Austin Jackson into consideration... not bad!

All the Yankee scoring action went down in the fourth, and Paul McAnulty figures prominently. I could possibly dedicate this game to McAnulty, really. Fourth inning, one out, nobody on. PawSox ahead 1-0 thanks to McAnulty's solo homer in the first. Ramiro Pena singles. Austin Jackson singles. Then big Smelly Duncan hits an RBI single to left to tie the game. Duncan looks like Wendell from the Simpsons.

With two guys on base for Scranton/Wilkes-Barre (such a magical, mystical place), dangerous first baseman Juan Miranda steps up. Miranda KILLS when he comes town, and tonight was no exception. Miranda hits one deep to left and... McAnulty just stands there for a minute. Like he's got it, he's right under it. But he wasn't, the ball was behind him and it was a disaster. Jackson scores! Yankees lead 2-1!

Special Guest Jose Molina batted next and reached on an FC. Miranda out at third but Jackson scores. 3-1, oh no! Designated hitter Colin Curtis followed Molina and struck out swinging for the third out.

Pawtucket got right back and got to work in the bottom of the fourth. With one out, Paul McAnulty hits a line drive double to right, unfortunately missing Shelley Duncan's head. Chris Carter singles right after that, and McAnulty chugs over to third. America's Sweetheart Aaron Bates K's to make it two outs. Then, Bubba Bell. Bell reaches on an error and McAnulty scores. 3-2 Yankees! Unfortch, Dusty Brown grounds out to end the inning, but hey! A run scores!

Scorelessness until the bottom of the sixth. Paul McAnulty is hit by a pitch and I think he cried a little bit. It looked rather hurty, but he took his base after some compulsory writhing. Chris Carter walked and then mischievous infielder Jeff Natale ran out to pinch run for McAnulty. He really tried, Mac did.

Aaron Bates grounds out and moves the runners over. And here comes weak-ass Bubba Bell. Surprise, though: Bell doubles to right, scoring Natale. Tie game! And the Yankees dispose of starter Sergio Mitre.

Dusty Brown then grounds to short, scoring Bates. Pawtucket takes the lead, 4-3. And the pitching handles the rest. Fuckin' A.

the gin in my vermouth:
1. I sure hope Bubba Bell breaks out of his nasty slump.
2. Angel Chavez' fielding skillz are ridiculous. I am impressed every single game. And that guy never sits, either. Last night he made some jaw-dropping plays, like everything's everything. Wow, mom. Wow.
3. Congratulations to Buchholz and Cabrera. They made the IL all-star team. Buchholz is not likely to attend, though.
4. McAnulty is going to be just fine. A trip to the DL is unlikely, I'd surmise.

Tonight! Bloodthirsty gangbanger Kris Johnson v Josh Towers. Johnson's been a little punk butterfly on the mound, but maybe he'll strap it on tonight. I have my doubts.
Posted by Jenks at 11:12 PM