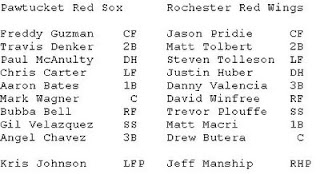 Your snazzily dressed Red Wings starter was righty Jeff Manship! Manship kept the Pawtucket kids down through six innings, walking three but keeping them to one hit. Rob Delaney, whose roster photo you really should see, kept the wolves at bay in the seventh inning for the shut-out.

Kris Johnson gave up all the runs and the hits and everything. TJ Large got the final two outs, but I suppose it was just busywork. Johnson did manage to pick off Matt Macri, so he's got that to console him as he tries to go to bed early.

Tomorrow! Game's at eleven a.m. or something. Good thing baseball players like to hunker down in their hotel rooms and fall asleep before midnight!
Posted by Jenks at 12:06 AM

Dorothy Manship is a saint!