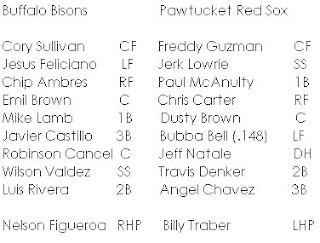 First of all, this message appeared on Twitter yesterday, courtesy of the PawSox: "**REHAB UPDATE** Mets SS Jose Reyes will be playing in Pawtucket tomorrow & maybe Friday - Great seats available at pawsox.com/401-724-7300".

And so I went into frantic mode and started contacting people, thumping the redial button, blah blah. I was so excited! People were excited! My life had meaning, a purpose!

One hour later, this came up: '**REHAB UPDATE** CORRECTION ARGENIS REYES will be playing for Buffalo -'. Oh, my god. What a friggin letdown. And seriously, who the hell cares about Argenis Reyes? What's more, he didn't even play tonight!

So that was pretty funny.

William Henry Traber, lefty reliever and Tower of Dominance, got a spot start tonight and it was remarkable! Traber gave up two runs on four hits in 5 2/3 innings. He also struck out three Bison. I had no idea he was going to pitch that deep into the game, but I guess Traber is the World's Strongest Reliever. It was very exciting.

Almost as exciting as Chip Ambres? Ambres got absolutely no love from Pawtucket (shameful!). He should have gotten at least a smattering of applause, but nothing. If I could have, I would have catapulted onto the field and given him a very squishy hug, but I'm classy and mature and don't care for public displays of affection.

Ambres hit two home runs and provided all the scoring for Buffalo. I can't even get too angry about that. Chip Ambres is the man and a way better outfielder than Bubba Bell.

But what about Bisons starter Nelson Figueroa? All I can say is 'WOW'! Beloved New Yorker Figueroa pitched eight dazzling innings, with nine strikeouts and only one walk. Welcome to Nellyville!

Pawtucket blew its wad in the first inning, with hotshot Freddy Guzman grabbing hold of the reins. Guzman led off with a single, stole second, scrambled over to third on a Jed Lowrie flyout, and then dashed home on McAnulty's flyout to center. There were a few other baserunners, but you know how that goes.

Hunter Jones had a solid ninth. I like it when he doesn't get fancy. A man of his carriage should pitch from his nuts, not like Casey Fossum or something.

two things:
1. I have a feeling Freddy Guzman would rather play for a team that hits. He's a runner. I'll bet he misses the Mud Hens.
2. The guy who closed for Buffalo, Brandon Knight, did a good job.
3. Bubba Bell made a glamorous diving catch in the third inning. Wooo. WHEN IS DANIELSON COMING BACK? EVER?!
4. Guzman singled a second time in the third inning. It was a crazy hit! The ball was totally out of the zone but he chased it and knocked it in there.

Pretty routine loss. Tomorrow! Enrique Gonzalez coming off the DL to face Tobi Stoner. I may go.
Posted by Jenks at 10:11 PM