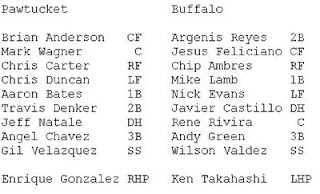 Enrique Gonzalez pitched fairly well, but when you give up three runs and you're pitching for Pawtucket, don't start popping bottles. It's like the Sharks and the Jets in the clubhouse, I'll bet.

Javier Lopez has been inconstant lately. Lopez came into the seventh inning with two RISp and one out. He immediately gave up an RBI single to Argenis 'Jose' Reyes. Mistakes were made. Lopez got the hook in favor of big Randor Bierd. Typical PawSox bullshit.

oh yeah? yeah!
1. Angel Chavez made two errors. Pawtucket committed four errors in the game. Unacceptable.
2. Jeff Natale has the highest average on the Red Sox. And that is really, really sad.
3. These guys also ruined Junichi Tazawa's very good start the other day.
4. This team is even worse than 2007.
5. I saw Ken Takahashi at McCoy a couple of weeks ago. He was charting pitches. The weird thing about it was that he was in full uniform.
6. Adam Pettyjohn is new to the Mets org. He is also not really a reliever.

Today! Bowden v Broadway. Bowden's picked it up lately, so let's see how it goes. Why not?
Posted by Jenks at 11:13 AM