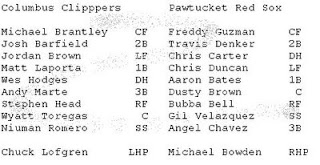 Losing must be so comfy for Pawtucket. It's familiar ground, at least. Like easing into a piping hot bathtub... ahhh! 3-1 Clippers.

Columbus's starting pitcher was lefty Chuck Lofgren, who started the year in double-A Akron in spite of being 33 years old. Lofgren pitched decently for six innings and got the win. He gave up the only Pawtucket run in the first inning when new kid Chris Duncan hit an RBI single.

The Red Sox countered with Michael Bowden. Bowden did a great job, giving up two runs in seven innings. Both runs were solo homers courtesy of Matt Laporta and Jordan Brown. Bowden got the hook after 80 pitches in favor of Randor Bierd, who gave up the third run.

I guess that's pretty much everything.

two things:
1. Pawtucket could only muster three hits. All of them were singles. Guzman and Bates did not get on base once. WEAK.
2. I think this is Bowden's second start of moderate-to-good quality in a row. Seven innings is a big deal in Pawtucket. This is more heartwarming than a romantic movie that involves time travel.
3. Randor Bierd is back after.. something. He was on the inactive list is all I know. I wonder if they put you on the inactive list if you have to go to rehab? Not physical rehab... SUBSTANCE REHAB.
4. In no way am I implying that Randor Bierd is an alcoholic or something.
5. Steve Hyder pretty much called the team out on his blog. Dan Hoard's a little bit country... Hyder's a little bit rock n roll.
6. What I am trying to say is that Hyder sometimes hangs out with Jeff Bailey and listens to the Who and the White Album.
7. Former Columbus Clipper Bret Boone was an alcoholic? Did he have to go on the TIA?!
8. Oh. Ummm... "The Game – Tonight, the Columbus Clippers will be facing the Scranton/WB Yankees at 7:05 at McCoy Stadium." From 'Sailing the Ship', a Clippers blog. I think.
9. Dear Chuck Lofgren's wife/mom: Please don't tell me I don't know what I'm talking about and that Chuck was in double-A because he was rehabbing. At least not in front of anybody.
10. I swear I know my gazintas: Chuck Lofgren is only 23. Also, he had a GREAT outing!

Tomorrow! Kenny Ray v Billy Traber. Okay, are you kidding me with this Traber in the rotation bullshit? Don't answer that. I like to think I explored the possible conversion of a reliever to a starter, and that it's documented here somewhere, but I have a bad feeling it was just a dream.
Posted by Jenks at 10:32 PM

First off Lofgren is 23 not 33, so I think you should correct that. Second of all he outpitched bowden all night and didn't not give up a hit after the first . If that doesn't deserve a great outing what does?

Thanks! I'll fix that right away.