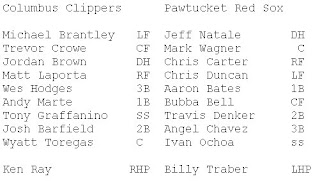 25-year-old Frank Herrmann finally took over for the Clippers in the sixth inning. Herrmann worked for two innings and managed to shut the Pawtucket bats up. Was that so hard? Geez.

Billy Traber started again for Pawtucket. Look, I understand the pitching situation but come on. Come. On. COME. ON. Are you telling me that there's no one in the lower minors worthy of a call-up? This is so typically Pawtucket. Maybe even triple-A. Remember Jimmy Serrano? Oh my god.

Traber didn't do too badly... okay, he didn't pitch that great, but he only gave up four runs. Normally four runs is game over for Pawtucket, but not last night.

Travis Denker and Chris Carter had four RBI apiece. Because they are clutch.

This game was stupid. I hate a sloppy relief corps with a big lead. BULLSHIT EGGS.

grip force the vials and strip the locks:
1. Thank you, major media outlets, for pointing out that Javier Lopez is getting his act together. I totally beat you to it, but I ain't mad. Lopez flaked out a little in this game, but w/e.
2. Newcomer Chris Duncan is the only kid who didn't get a hit, but he walked three times. I'll take it.
3. Chris Carter and Bubba Bell each made an error.
4. Is Aaron Bates no longer an outfielder? He's only played the outfield once in 33 Pawtucket games. I looked it up.
5. Ken Ray is a highly valued player: They let Ray throw 120 pitches. I hope he got good and drunk after the game. For the Lord.

Also, pawsox.com should know that home run is two words!