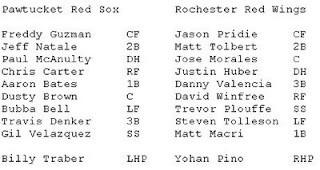 Yohan Pino got the start for Rochester. Pino pitched five innings and gave up three runs, all coming by way of the long ball (Carter with a runner on, Carter solo.)

Top of the ninth: Reliever Tim Lahey stays in the game to face Bates, Brown, and Bell. Bates and Brown greet Lahey with back-to-back singles, but Bubba Bellhorn strikes out looking.

With one out and runners at first and second, third (yup) baseman Travis Denker steps in and doubles... Bates and Brown haul ass and both runners cross home plate.

But that was all, of course. I mean, Freddy Guzman singled, but nothing else really happened. Is Travis Denker the offensive stud in Pawtucket? Is that where we're at?

The Red Wings got crunk up in the infield with their cheap hits. I suppose the bumbling Pawtucket defense didn't help anything. Travis Denker usually plays second base, but tonight he filled in for fielding Einstein Angel Chavez and honored his legacy by committing three errors. And Rochester didn't really have that One Big Inning... their runs were scattered here and scattered there/bits of runs scattered everywhere. Five of Billy Traber's seven runs were earned. Rocky Cherry gave up two more runs and Vaquedano gave up three. Vaquedano has been struggling lately.

So five of Billy Traber's seven runs were earned. Rocky Cherry gave up two more runs and Vaquedano gave up three. Vaquedano has been struggling lately.

better shave her a little closer:
1. Billy Traber starting again? What the French? Can't they start bringing some Portland kids up and getting rid of Pawtucket people? Isn't the season a wash anyway?
2. Good work, Chris Carter.
3. Pawtucket had five errors... Velazquez and Guzman made the other two.
4. Dave Winfree has a weird tattoo on the back of his neck that I cannot stop looking at when I see him play. It sort of looks like a surfboard or a tiki idol? WHAT IS IT?!
5. Winfree homered along with Justin Huber.
6. It was starter Yohan Pino's first start in triple-A.