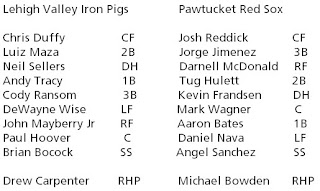 Michael Bowden started for Pawtucket and did reasonably well. Bowden only tossed 45 pitches. 30 of them were for strikes, so enjoy that. Bowden kicked off the second inning by walking big boy Andy Tracy. Tracy advanced to second on a Cody Ransom groundout, then ran home for a run when John Mayberry Jr hit a very exciting triple. And that was Bowden's only run.

Except Embree did not really get the job done. He managed to get hit machine Andy Tracy to strike out, but he subsequently walked the law offices of Ransom and Wise. Mayberry rolled up next, and you know all about his power. Mayberry was clutch and singled, scoring Ransom.

Embree then walked Hoover and Bocock, the bottom of the order. DeWayne Wise walked on home. BASES LOADED ONE OUT EMBREE NOT GETTING IT DONE.

cositas:
1. Aaron Bates hit a three-run homer.
2. Josh Reddick 0-5.
3. I left the game around inning six. It was cold and kind of the opposite of fun.

Tomorrow! Day game. You should go.
Posted by Jenks at 9:13 PM