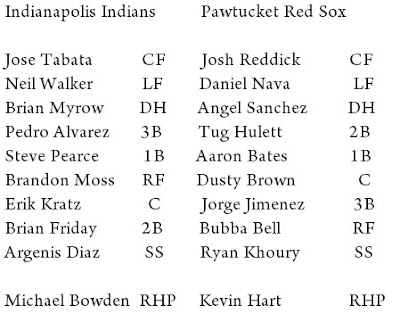 Indianapolis (heretoafter, Indy) wins! 10-9 thanks to Fernando Cabrera blowing his first Pawtucket save.

But I'm not looking at Cabrera because I am looking at Michael Bowden and wondering what the hell I am missing. First, Bowden's line: 4 2/3 innings, five hits, seven earned runs, three walks, and two K's. Bowden threw 89 pitches, 50 for strikes. Two home runs, one a grand slam. Not a great start, but also not terribly far from a typical one.

I really have yet to be dazzled by Bowden. Or maybe I have been dazzled once or twice, but I've forgotten about it. (Entirely possible at my age.) But what is so exciting about him? Am I that dumb about pitching prospects? He'd better have a bitchin' summer!

And now, Indians. Starter Kevin Hart had 99 problems on the mound, giving up 8 runs to Pawtucket. Things like that happen when you give up seven hits and four walks in two innings. Evidently, Hart had location difficulty. After three innings, the Red Sox were ahead 9-3.

let's skip ahead:
1. Would you believe that Pawtucket scored nine runs with only ONE hit for extra bases? That would be Mister Tug Hulett's double in the second.
2. Wil Ledezma got the save for Indianapolis. Do you know who else pitched? Vinnie Chulk! I KNOW! Vinnie Chulk is like Cher in terms of celebrity relievers.
3. Margin Walker hit a home run right away in the first inning, setting the tone for DESTRUCTION. Walker wound up going 4-4 with three RBI. You have to meet this guy!
4. Outfielder Jose Tabata is like 20 years old and rather interesting. I do, however, miss Andrew McCutcheon. I guess some birds just aren't meant to be caged.
5. Dusty Brown did not get a hit, but he did get two walks. He's also the man that Kottaras could never be. I can overlook the two passed balls.
6. Kevin Frandsen was DFA'd. If I understand correctly, he is not supposed to be hanging out in the clubhouse or anything, availing himself of gym equipment or smoothie makers or hair gel. Which is so dumb, if you ask me. FRANDSEN!
7. Bubba Bell led the team in runs batted in today with three. Yeah, he's definitely getting shitcanned!
8. Brian Myrow hit the grand slam. I have never heard of him before, but now I will never forget him.
9. Brandon Moss got a lot of love during his time in Pawtucket. Just like Chris Carter! So why do I like Moss and not Carter? I don't want to say, because I am a lady.

Tomorrow! I think I'll go to the game provided it's a few degrees warmer. I do so love the Pirates' minor leaguers.