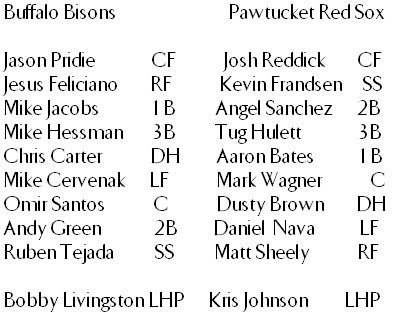 I am astonished at how dumb I can be sometime. I predicted Kris Johnson's start to be poor. But it turns out he pitched really well. Johnson pitched five innings with three strikeouts and just the one unearned run. That run was the result of Kevin frandsen's throwing error in the second, which allowed Cervenak to boogie over to second base. Chris Carter, who had kicked off the second with a single, eventually crossed the plate thanks to Andy Green's groundout.

And Robert Manuel continues to be freakishly good, going three scoreless and keeping a tight grip on his 0.00 ERA. Joe Nelson polished off the last inning like a piece of huckleberry pie.

How's that for an awkward sentence?

and now, the dirty:
1. Frandsen and Daniel Nava each homered this afternoon.
2. Kris Johnson came pretty close to giving up a second run in the second, but Josh Reddick nailed Mike Cervenak at home.
3. Jesus Feliciano has been moved up in the Buffalo lineup.
4. No Hessmania? Hessman did not get a hit.
5. Nice, crisp game: Two hours and 18 minutes.

Tomorrow! Fabio Castro will face Jeremy Powell. Guess who else is coming? Neil Walker! I know!
Posted by Jenks at 9:46 PM