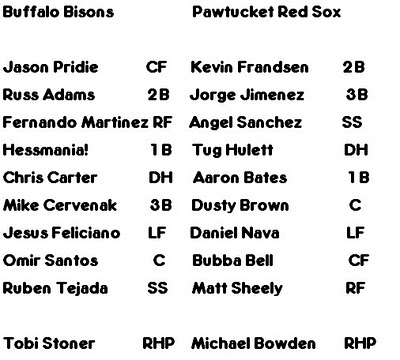 5-3 Pawtucket. Michael Bowden had a typical start, enduring four innings/76 pitches. While Bowden wasn't terribly sharp, I think he got the hook a little early.

Bowden must have been stressed out in the third inning. He started it off by walking 15-year-old infielder Ruben Tejada and then followed that up by walking IL Repeat Offender Jason Pridie.

Then! Russ Adams hits this shot to center field and he was kind of loafing it to first, which was dumb because it wasn't caught and it didn't leave the park. It turned into a long single. What a waste, Russ Adams!

So hot prospect Fernando Martinez flies out to center (nice catch, Bubba Bell), and then Mike Hessman strikes out. Hessman was all mad about the strike zone and amde his opinions known, which resulted in an ejection. Andy Green replaced him in the game, which put a damper on HESSMANIA!!

Chris Carter batted next and was hit by a pitch. Except, I'm pretty sure he was faking it. No matter - he was stranded on first when Mike Cervenak flied out.

TOBI STONER. Stoner pitched six innings and walked half the park. And gave up all five runs. Jorge Jimenez cranked one out in the third inning with Bubba Bell on second, giving the Red Sox their first two runs.

Kiko Calero (yes) squeezed out the last two innings in a lovely, scoreless fashion. But alas, Pawtucket's relief was strong. Alan Embree has more than atoned for his prior mistakes. You know what he's doing to his ERA? He's jumping on it like Daffy Duck, stuffing it back into the lamp while screaming, "DOWN! DOWN! DOWN!"

Robert Manuel was especially cool, pitching a pair of scoreless innings. He has yet to allow a run.

fatness:
1. Joe Nelson and Fernando Cabrera also got some work in.
2. I feel as though I have been overlooking Dusty Brown and his contributions to the team. I watched him nail Mike Cervenak during some base stealing action and it was so cool. I wonder if his heart rate increases when he's about to throw to second and get the runner? I know mine would. My heart would pound and I'd be thinking "I'M GONNA GET HIM I'M GONNA GET HIM I'MGONNAGETHIM!!!!"
Anyway. Dusty Brown is solid. In my mind, he's getting a slow clap.
3. Speaking of Cervenak, he's been around for a few years and how have I never noticed how dirty and greasy he is? It's pretty hot. I like his brown hair.
4. I'm sure you heard about the PawSox playing Carter's old at-bat music last night. I guess you have to be a fan of his to appreciate that.
5. Angel Sanchez is handsome-ish, too. Wait, no. I never said that!

Today! The lovely and talented and sensual Randor Bierd gets the start v Bisons endurance man RA Dickey. I wish I could go.