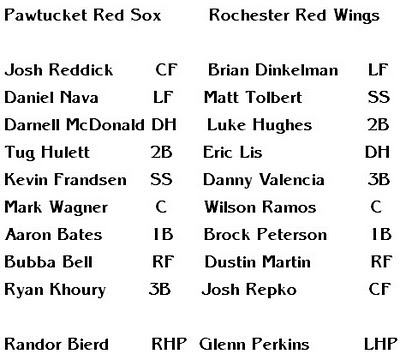 But let's back up. Randor Bierd got his first start of the year! Randy... Bierdy... Arby... whatever. Bierd. Bierd was five innings cool and coughed up three runs. Chad Paronto was the subsequent burrito. Paronto led off the sixth by giving up a single to Luke Hughes. Understandable, since Hughes has been killing the Red Sox.

But then after getting DH Eric (or Erik, I don't know and I don't feel like looking it up) Lis to fly out, Little Danny Valencia singled. And catcher Wilson Ramos reached on an error. THANKS A LOT, RYAN KHOURY. WHY ARE YOU EVEN HERE?

Big Brock Peterson (I'd say he's also ugly, but he might not be) then hit an RBI single. And Dustin Martin steps up and hits a three-run homer. It was just one of those things. Joe Nelson had to enter the game and save the day. Rochester wouldn't score again and the PawSox enjoyed their post-game milk n cookies with clear consciences.

Glenn Perkins was the Red Wings starter and got 3 1/3 innings in. Perkins gave up seven runs so it was not a good night for him. Pawtucket was up 2-1 at the top of the fourth. They kicked off their five-run business with a helpful Kevin Frandsen double. Mark Wagner bunted him over (!), which was kinda academic since Aaron Bates homered directly afterward. POW!

just this morning, right before it got stolen, Frandsen offered... FRANDSEN!!
1. And that is how I say Frandsen's name in my head. Frandsen hit three doubles. He looks a little like Josh Wilson if you squint.
2. Alan Embree pitched a scoreless eighth. Robert Manuel closed it out.
3. Rochester's Kyle Waldrop pitched two scoreless innings with one strikeout. Is he their best reliever?
4. Darnell McDonald went 0-5 with 3 K's. Three RBIs for Mark Wagner.
5. Wings left fielder Brian Dinkelman made an error, but he erased the evil with a home run.