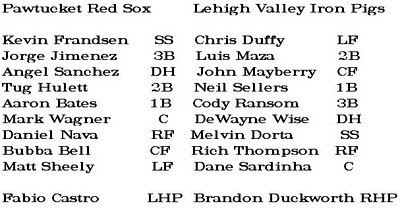 Pawtucket didn't score until the seventh inning, and it certainly wasn't against NAME PLAYER Brad Lidge. The man on the hill was Jason Anderson (THE Jason Anderson?!). Daniel Nava led the inning off with a single, but... well, the next batter was Bubba Bell and what do you think happened? Yes, Bell grounded into a force play. Ooooh, prospecty move there, Bubba!

Jorge Jimenez followed Frandsen's hit with an RBI double. The third run went down in the ninth with Mike "Bronko" Zagurski pitching, when Matt Sheely singled and advanced to second via defensive indifference. An error at first base allowed Sheely to scamper home.

And now, the bad stuff: Ramon A Ramirez and the Deadly Seventh. The score was 6-2. Not good, but reasonable. Ramirez loads the bases with three consecutive singles. And then Chris Duffy doubles. Two runs in. Mayberry singles: two more runs score. Cody Ransom doubles: He gets to second base!

Okay, so no runs batted in for Ransom in the seventh. But DeWayne Wise hit another two-run double... oh, man.

So... Fernando Cabrera had a nice, clean inning!

migajas:
1. Bubba Bell went 0-4 with two strikeouts. At least Tug Hulett walked!
2. The home plate umpire was Vic Carapazza. Great name, but he's no Val Pascucci!
3. Starter Fabio Castro only pitched three innings. He entered the fourth, but did not get any outs.
4. "The Phillies did a great job getting me on a strengthening program and then getting me back in games when I was ready," said Lidge, reading from an index card handed to him in haste.
5. Lehigh Valley infielder Luis Maza went 4-5 with a triple.

Tomorrow! The Red Sox return home for some hot Buffalo action. I'd invite you to come, but I'm sure you have better things to do on a Friday night.

so what they scored 12 runs.
do they have...
PHIL LEE!
no i don't think so
so fuck the iron pigs
if pigs could fly they say?
i'd like to see an iron pig fly...
FLERM