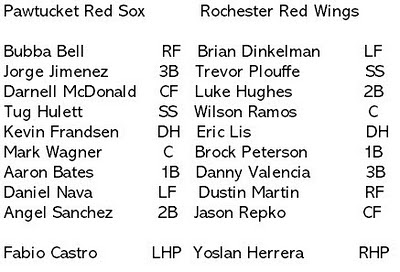 Red Wings take their home opener, 6-5. And it was really, really cold.

Lefty Fabio Castro Started for Pawtucket. Castro only worked three innings, but his pitch count was up to 71. There were walks, there were hits, there were three runs. Ramona Ramirez was effective for the next pair of innings, but reliever number two Joe Nelson gave up two more runs in the sixth.

Top of the eighth, Red Sox down by one. Aaron Bates doubles, bringing home Tug Hulett. Tie game! Joe Nelson is replaced by Fernando Cabrera in the bottom of the eighth. And Cabrera, after getting a couple of quick outs, gives up a single to Trevor Plouffe which proved to be his undoing. Luke Hughes found the RBI opportunity irresistible and cracked a hit over to left, doubling home Plouffe(y).

Angel Sanchez helpfully led off the ninth with a single, but after Bubba bell struck out, Jimenez lined out to D. Martin, doubling off Sanchez. Game over. Loss to Cabrera, win to Rochester reliever Rob Delaney. Delaney was also nicked with a blown save. Exciting!

Red Wings starter Yoslan Herrera pitched for five innings. There, I mentioned him. I'm running out of time!

way too cold for me:
1. Regarding Luke Hughes: "The frigid man from Down Under turned into Luke Warm in the Frontier Field opener, with three doubles and four runs batted in as Rochester edged the Pawtucket Red Sox 6-5." (from the Rochester paper).
2. Darnell McDonald continues to crush 'em - he tripled in this game. DMAC is not just a community college!
3. Bubba Bell went 0-4 with two strikeouts. Tick tick tick.
4. Listen to Luke Hughes and manager Tom Nieto post-game here. Just fucking do it, okay?