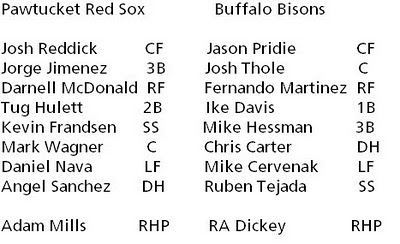 Buffalo WINS! 8-2. RA Dickey pitched a complete game, giving up only two runs. When was the last time a Pawtucket pitcher went the whole nine? I can think of only one candidate: Devern Hansack. Maybe him. Anyway, the New York Mets obviously don't give a crap about their farm system if they don't limit their guys to five innings/85 pitches. Whichever comes first.

Dickey was opposed by one mister Adam Mills. Mills(y) did the right thing and only pitched five innings. He gave up four runs on seven hits. Former PawSox person Chris Carter was the ruination of Red Sox pitchers. Carter hit a two-run triple (!) (?) in the second inning, a two-run double in the sixth (off freaking Kris Johnson), and a double in the bottom of the eighth. There was a single in there, too, but even Jason Pridie got one of those.

Pawtucket's two runs were thanks to a solo homer by Tug Hulett and a Darnell McDonald RBI single.

opening day wins will make you strong:
1. Looks like Kris Johnson sucks at relieving just as much as he sucks at starting.
2. If you care about batting averages, Darnell McDonald has the highest on the team. McD went 3-4.
3. Josh Reddick still hitless. It is very, very early. That being said: HA-ha!
4. Chris Carter. I just got so sick of hearing about how awesome he was and what a great guy and blah blah blah. Evidently, I am the only one able to refrain from fellating him. He can't fucking field. He did go 4-4, so bully for him. Here, watch this video.
5. HESSMANIA!!! Mike Hessman went 3-4 with a double.
6. Bisons SS Ruben Tejada is the youngest player to start for the team in 17 years (age 20). Tejada is from Panama.
7. "I throw a firm knuckleball, which creates its own wind,’ said Dickey, who also gave praise to his defense for some sharp work. ‘It was top notch. Cervy (LF Mike Cervenak) was out there putting on a show, and we got great ground balls. Today I had a pretty good one." source

That's all. Daisuke Matsuzaka will pitch in Buffalo tomorrow. They're calling it "Beat Boston Times two", since the Bruins are also playing the Sabres. Enjoy misc items costing $2.00
Posted by Jenks at 7:50 PM