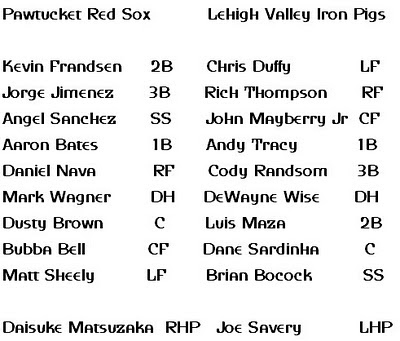 Red Sox win, 8-4. Daisuke Matsuzaka was the story of the day, I suppose, but not for me!

Lefty Joe Savery was the losing pitcher for Lehigh Valley. With a name like that, Savery should be a) a closer, or b) Italian seasoning. Can you imagine that category on $10,000 Pyramid? Like at the end? 'Things That Are Savory'? That would be the hard, hard one.

Getting back to baseball: Savery worked five innings and barfed up four runs on seven hits, including a Kevin Frandsen home run. Frandsen! Alex Concepcion relieved Savery and couldn't get out of his inning, giving up four more Pawtucket runs. Well, three of them when Ehren Wasserman pitched, but still.

Right fielder Daniel Nava was the RBI queen for the night with three. Nava hit a three-run double in the sixth inning.


Tonight! Brad Lidge expected to pitch. Fabio Castro goes for Pawtucket.
Posted by Jenks at 9:59 AM